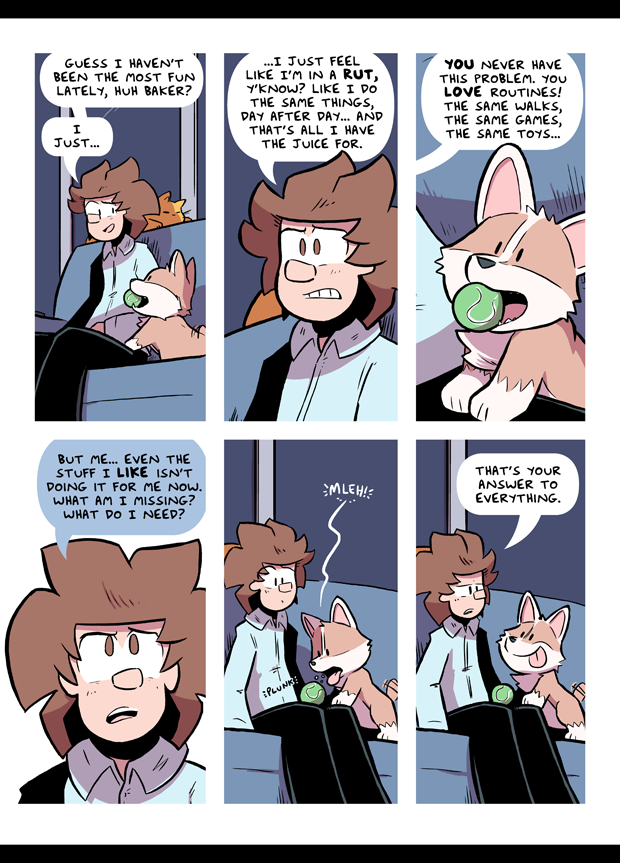 Q & A: Return Edition
Got a question you want answered? Just drop me an email with "Q & A" in the subject line!

"You've got a couple characters that have narrowly escaped death at the end of their arcs. Did you ever consider actually having any of these characters die? Rexford, Fuzzy, and Hazel are the candidates that come to mind, with Rexford's arm melting in the Tar, and Fuzzy and Hazel both being completely swallowed by it. Would that have just been too hard a move to take?" -Alex

Obviously, things get pretty dangerous in S&F's finale, and the tar erruption is certainly the kind of disaster that could bring some collateral damage. But to be honest, I just decided kinda early on that Sam and Fuzzy was not that kind of comic.

I am pretty opposed to randomly killing off supporting cast members just to shock or raise the stakes. And even when it's the culmination of an arc, I think tragic and heroic deaths are something to be used sparingly.

So, the only big "loss" I ever had planned for the climax of S&F was Hazel. It's not a death per se, but her meeting the same fate as "Eric" is, I think, still very tragic and sad. That was the one big loss I really wanted readers to feel when they read that story, and so I didn't give it a lot of competition.

"Was about to ask if the blonde nudist merch-monger was who I thought it was, but then I checked the character archive and realized yes! It is! Andrea has made her grand return!" -Anthony

Haha... yes, that was Andrea! I thought it would be a fun cameo. I miss writing her!

"Are the [Saucy Hippo tier] Patreon comics 'canon'? If so, when do they take place?" -Nate

They are separate, stand-alone stories... but they are completely canon! The most recent story on there, Gert's Gambit, takes place slightly after the comics that are currently running on the site. (Maybe a few months or so.)

I think maybe I haven't always done the best job of explaining what the deal with my "adult" comic work is, so maybe I should try to. Honestly, the only difference between the Saucy Hippo comics and all my other comics is, well... there are naked people and sex in them. (lol.) But otherwise, they are still comedic, dramatic, character-driven stories. They star many of the usual suspects from around here, and will feel tonally familiar to anyone who has read any of my dating, romance, or burlesque-focused stories here on the site.

That said, I label 'em NSFW for a reason! They do not shy away from adult subject matter. So if comics about sexy stuff upset, shock, or bore you, don't feel bad about skipping them. The stories are self-contained, so even though they feature a lot of the same characters as my other work, you won't miss on any important plot developments or anything.

However, if you are an adult who does like sexy comics, and you also like my work... honestly, you'll probably love 'em. I think they are some of my best work, tbh! And here are over 130 pages of 'em now, all of which can be read by signing up for my Patreon's Saucy Hippo tier if you are so inclined.

This Friday, I'll be back with a new comic and a new round of Q and A! If you've got a question you'd like me to answer, just pop it in an email with "Q and A" in the subject line.

This Friday: Q and A returns! If you've got a question you'd like me to answer, just pop it in an email with "Q and A" in the subject line.

Also: Attention, Saucy Hippo-tier Patreon backers! This year's annual survey -- where y'all get to vote on what kinds of "nsfw" comics and artwork I do next -- is now live. If you're a member (or are planning on signing up in the near future), get yer votes in by Friday! We'll be doing a little prize draw for an original drawing. Woo! 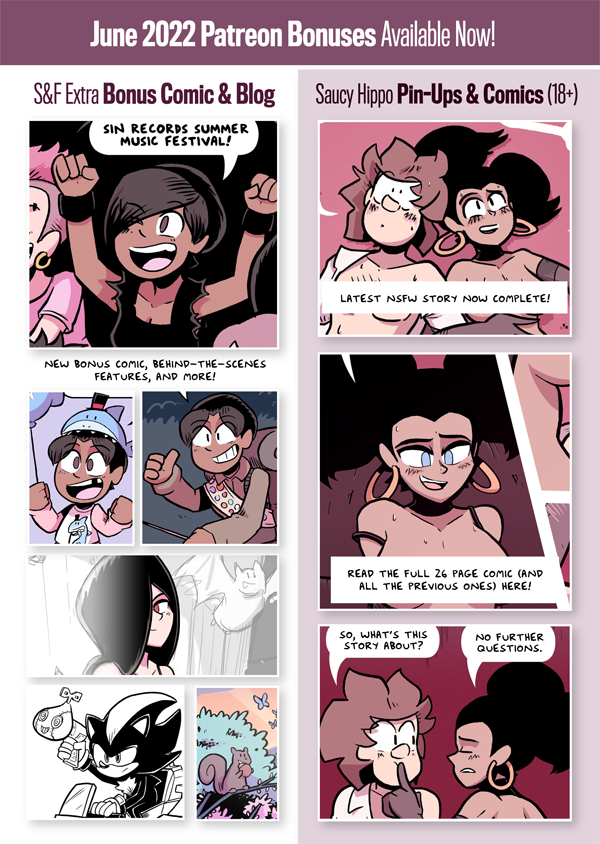