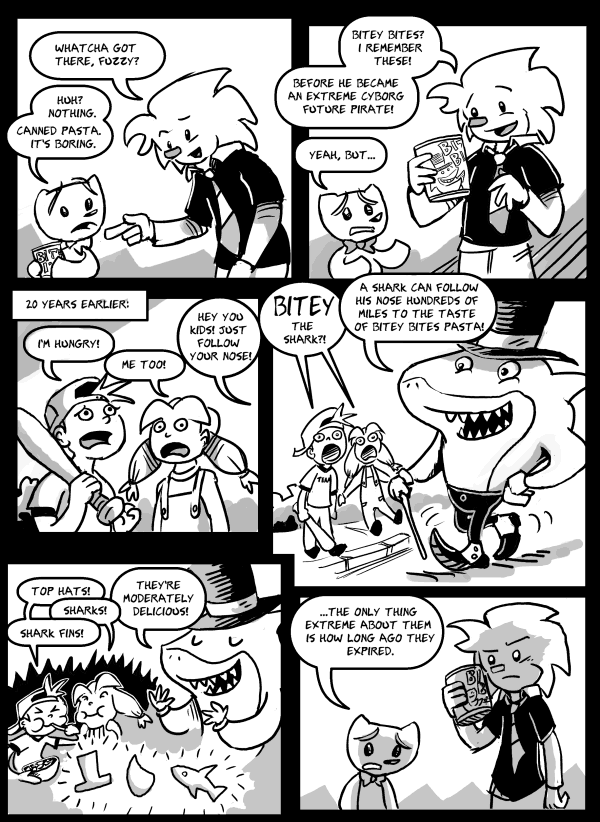 Today's comic is brought to you by Michael Stearns, author of the delightful Dawn of Time and expert Dinosaur craftsman. Michael provides us with our first look at the original Bitey the Shark, who until now has only been seen in his x-treme 90s incarnation. Merry Giftfest!

Our next guest strip is unleashed tomorrow. See you then!

We kick off O-GAWD 2010 with this inspirational tale from Lars Brown. Lars is the man behind the truly excellent North World. It's currently on hold as the man ponders new projects and stories, but there is a bountiful archive that you can enjoy either right here on the web or in attractive dead-tree editions from Oni. Much recommended!

We've got strips from some incredibly talented artists lined up for every weekday of both this and next week, so be sure to tune in and read them all. There is some truly special stuff in the mix this time around!

(And while you are all enjoying it, I'll be getting a head start on drawing my next big storyline, so that it can run uninterrupted while I am away in Peru in February!)

Sam and Fuzzy Q & A: Con Edition
Got a question you want answered? Just drop me an email with "Q & A" in the subject line!

"How come you don't do more cons? Jeph does like dozens every year, and you do, what... three?" -Allison

Six is my "magic number" of annual con appearances. It's magic in the sense that, if I do any more than six, I would go completely nuts.

Don't get me wrong... I really enjoy going to conventions! But they involve a lot of work, and a lot of traveling -- and whenever I have done too many too close together, all that work and traveling starts to take a serious toll on my brain. Keeping the number of shows to a manageable size is my way of ensuring I still have a good time and don't explode.

Speaking of which, here is how my con schedule is shaping up for this year!

That's everything I've committed to so far! I'll let you know if any more pop up.

"I was eating dinner the other day and found myself remembering and laughing at Aaron's face in the last two panels of this comic. Everyone thought I was a bit weird and it was sort of hard to explain. :P I was wondering if this ever happens to you? Do you laugh at your own comic jokes at all?" -Amanda

Almost never! To be honest, by the time I've finished spending 8 hours writing and illustrating a comic, I've "lived" with the joke so long that I can't even tell if it's funny or not anymore.

But I like to go back and read through the comics a year or two later, when I've forgotten most of the jokes and can actually be surprised by them. For the first time, I can experience and react to them the way readers do. It's a nice feeling. (When the jokes are funny, anyway.)

It's OK. Makes me feel better about my next storyline, where the government institutes a "Ninja Registration Act" and Sam gets killed by the Red Skull.

That's it for this week, and for the "Employee of the Month" storyline. That leaves just one storyline left before the conclusion of our current volume!
But first, we take a quick break for the fifth "annual" Obligatory Guest Artist Webcomic Duration (O-GAWD). See you on Monday!