I just wrapped up Ghost Trick, the (relatively) new game from Ace Attorney creator Shu Takumi. As you'd expect from the father of Phoenix Wright, the story is unapologetically goofy, but absolutely captivating, and there's a lot of fun to be had in the central "ghostly" item-posession mechanic that urges you to unleash ridiculous Rube-Goldberg-machine-esque scenarios to save lives.

But the biggest achievement, in my opinion, is the wonderfully detailed animation. Every one of the game's tiny little characters is absolutely dripping with personality, in a way I don't think I've seen since the old LucasArts adventure game days. Good job, Capcom! Sorry no one bought it. A+, would Ghost Trick again. 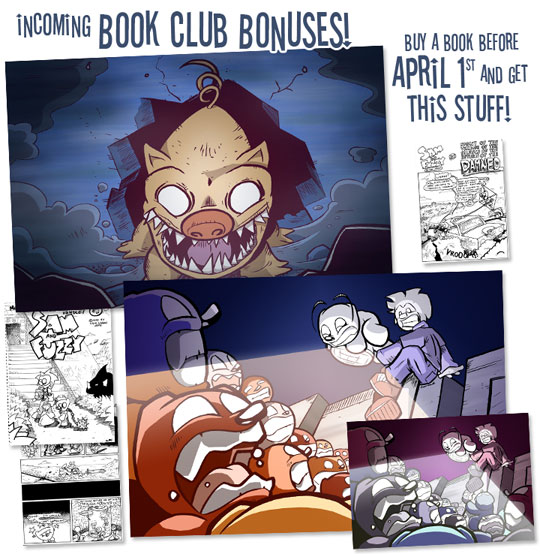 Whew! I've updated the Book Club Info Page with descriptions and previews of all the swag going into our next bonus pack. As you can see, there's even an extra desktop that wasn't part of Friday's preview, featuring the mighty Fig Pig! 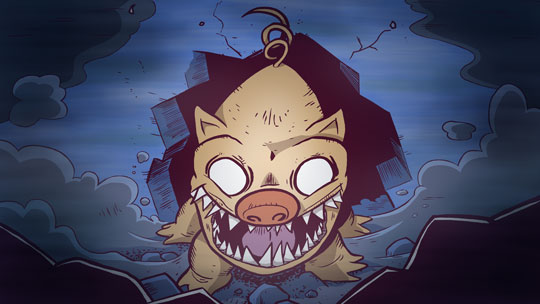 If you're a proud Sam and Fuzzy Volume 1 owner, (or if you pick one up before April 1st), these goodies will be yours by the first weekend of April. And all for the price of a box of pencils! (That you took for free from the office supply closet when no one was looking.)

This time around, I'll also be enlisting out members to help me decide the subject matter of our next bonus desktop. Here's how it's going to work! Start emailing me your suggestions (put "Desktop" in the subject line), and I'll take the best ideas and put them into a poll that will come along with the new bonus pack. Whichever one wins the poll will be a part of the next pack. Democracy!

Sam and Fuzzy Q & A: Bonus Edition
Got a question you want answered? Just drop me an email with "Q & A" in the subject line!

"What's going to be in the next club pack? My desktop is looking mighty stale, Logan!" -Jack

Well first off, our next pack of bonus goodies for Book Club members will contain a digital copy of the entire second issue of the never-before-seen proto-Sam and Fuzzy comic book! Like the first, it's a 16-page story I drew before the webcomic started, and features plenty of early (and sometimes very different) versions of concepts that later made it into the webcomic proper. (Also, there are jokes in it.)

But don't worry... I've got something for your desktop, too. Because it's so relevant to the current chapter, I'm resurrecting the long-sold out "Fuzzy Mob" print... updated, recoloured, and ready for your monitor. I'll be offering it in three flavours... one based on the original blue and orange colour-scheme, and two brand new versions with a milder and more "undead" kind of vibe. Here's a sneak peek (the second is my favourite): 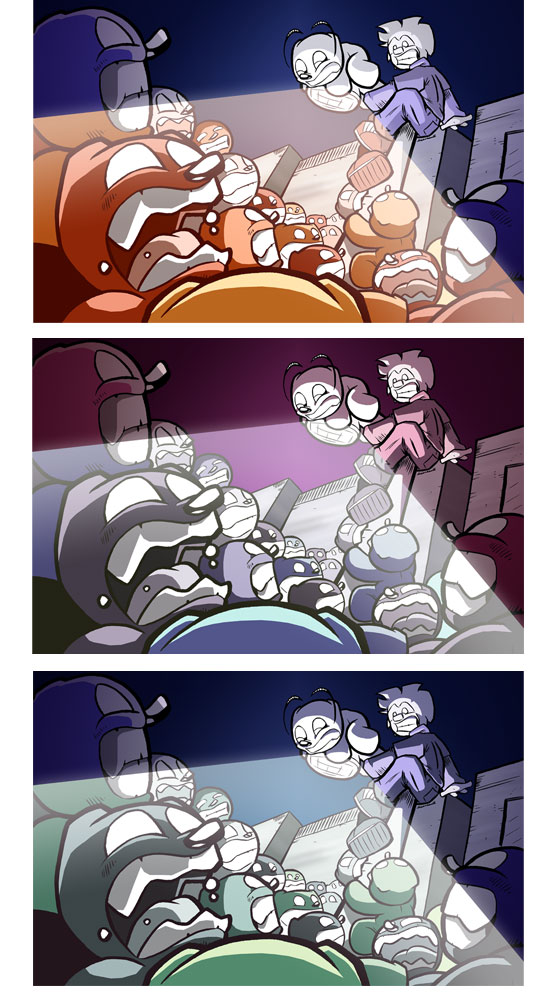 All three desktops (in every resolution you can imagine), plus the 16-page digital comic, will be mailed out to our Book Club members on April 1st.

If you want to join the club, all you have to do is pick up a copy of Sam and Fuzzy Fix Your Problem by April 1st! Anyone and everyone who has ever bought a copy online is automatically in, and will receive the free swag. (But if you bought a copy in person at a convention and haven't already contacted me to sign up, drop me an email!)

"Will Fuzzy ever mention 17th Century chemist Robert Boyle again? It's a great line I've taken to use in my daily life. Also, is it okay if people get tattoos of Sam and Fuzzy?" -Erich

He will if it seems funny! There is a fine line between a running gag and a dead horse (named Hidalgo), but I think I walk it reasonably well.

Many people have gotten tattoos of Sam and Fuzzy characters, regardless of whether or not I think it is a good idea. I wouldn't personally recommend it, but hey... it's your skin! I just hope any folks who do at least pick a good drawing of the character to copy from. (Or better yet, hire me to draw one.) Sometimes I feel like folks deliberately go looking for the worst-drawn Fuzzy in the archive to get permanently branded onto their body!

"I live in Rochester, NY in America where we have some Tim Hortons. As I'm sure you know they're having their roll back the lid win a prize (probably coffee) thing. In the fine print on the cup it says that Canadian residents must pass some sort of skills test and I was wondering what sorts of skills Canadians must have in order to win a cup of coffee?" -Brad

I'm always happy to be the go-to Canadian, Brad! Here's the deal.

In Canada, for-profit gaming or betting is technically illegal, with the exception of province-run lotteries, charity events, and provincially licensed casinos. But, prizes are allowed to be awarded for games of skill, or games of chance that have at least one skill-based component to them. Can you say "loophole"?

The end result is that contests, raffles, lotteries, gameshows, and even fast food prizes all exist in Canada just as they do elsewhere in the world, only with one additional step... the winner must then "earn" their prize by answering a skill-testing question. The question is almost always a basic math equation involving parentheses, no harder than this: (25 × 4) - (8 × 3). So, if you ever win big (or small) at Tim Hortons, I hope you passed 3rd grade math!

I know it all seems a little silly. But on the plus side, winnings and prizes in Canada aren't taxed. So, I think we come out on top overall.

That's a wrap for this week. Come back on Monday for more comics!