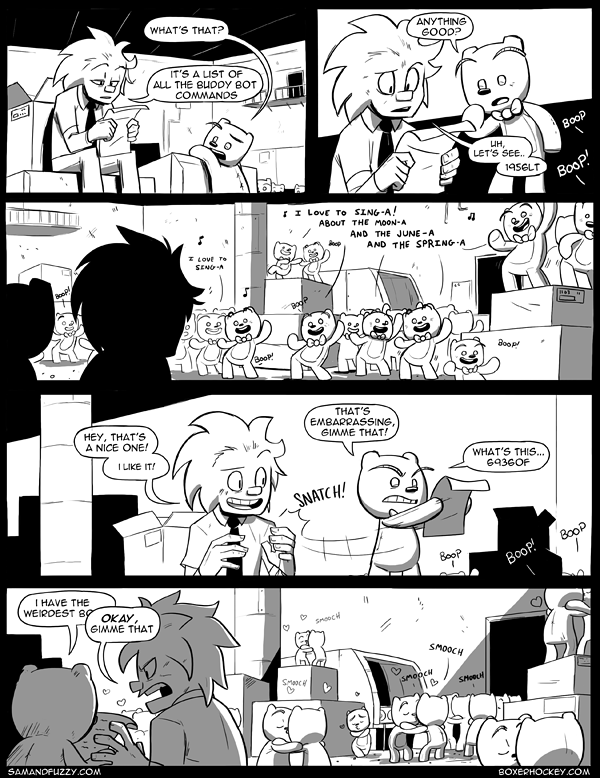 Man, Boxer Hockey is a hell of a webcomic. I actually feel a little guilty just for sucking up Tyson's Boxer Hockey-drawing time with this guest strip project. Just kidding! I'm way too selfish for that. All I know is I got a swell guest strip out of the deal. Suck it, Boxer Hockey fans!

Don't forget... we're updating with new guest strips every day this week! So come back tomorrow for our penultimate contribution!

Calgary Expo begins this Friday! You can find me, not at the Topatoco booth, but at booth #913, with my pals Alina and Lane from Weregeek! I'll have tons of art, books, and the broadest selection of t-shirts I've ever had at a con. It's going to be a thing of beauty, man.

The strip you just read, perfectly executed by my intrepid TCAF booth neighbour Joel Watson, is a 100% accurate recreation of real events that really happened. (Well except maybe for the tunnels.) I was telling Joel about how I sometimes come up with shirt ideas that work perfectly from a design sense, but express ideas that no human being would ever actually want to have on their body... only Joel thought "Fart Trap" was a great idea! And rightly so, as it turned out, because now I'm a billionaire. True story!

And speaking of conventions... holy smokes, Calgary Expo starts this Friday! The Calgary Expo was my favourite convention last year. Will it hold the title two years in a row? You can help... by coming to the show and swinging by the booth!

Be warned... I am not at the Topatoco booth for this show! But I am very close by. Just like last year, I'm splitting a booth with my pals from Weregeek... we did really well with that setup last time, and I am not about to mess with a good thing! For your navigational assistance, please refer to this helpful map!

Anyhoo, that's a wrap for today. Come back tomorrow for our next epic guest strip!


Michael Stearns, he of the always impressive Dawn of Time, continues to build the history of popular Sam and Fuzzy-verse cartoon character Bitey the Shark! I've only ever drawn Bitey in his modern, extreme form, but as Sam and Fuzzy once explained, he was once a much less abrassive (if no less commercial) mascot. Fortunately, we have Michael to provide us with "classic" Bitey snippets... both in his previous guest strip, and now in today's!