"Is that the 'Overkill is just one of my many modes' and a werewolf in the Monday/Wednesday strips?" -Tom

Pretty much! That is a werewolf, and a similar (albeit not the exact same) robot. There are a lot of groups (and species) from throughout Sam and Fuzzy history represented on the Committee. And a few of the members themselves have appeared (or at least been mentioned by name) before.

It's a montage, my friend! That's just how eight of the members voted. The committee has many others! In fact, after having to draw them all so many times over the last two weeks... I might even say too many.

"Even though he fell to his death in the 'Showdown' storyline, Mr. Blank returned for a cameo in 'The Big Cheat'. Any chance we might see other departed characters (e.g., Mr. Black, Candice, or 17th-century chemist Robert Boyle) show up? " -Harold

Probably! And in one case, definitely. But not for quite awhile. (And don't worry... as in Mr. Blank's cameo, they won't be magically springing back to life or anything.)

In the nearer future, some other equally familiar but significantly less dead faces will also be turning up. Can you guess who? You might be able to, if you have been paying attention!


"Did you know that Brandon Sanderson (author of the Mistborn trilogy and the man hand-picked to finish the last Wheel of Time books, among other things) is apparently a fan of yours? (Considering I'm a big fan of both you and him, I find that really cool.)" -Matt

I did! Brandon is super nice guy, and a pretty serious webcomic fan to boot. He was reading way back in the early days of Sam and Fuzzy. I actually have a signed copy of his very first book, Elantris, that he kindly sent me when it was released back in 2005. (And I was finally able to return the favour at last year's Comic-con, when we were launching Fix Your Problem!)

That's a wrap for this week. Come back on Monday to find out what the heck is going on! 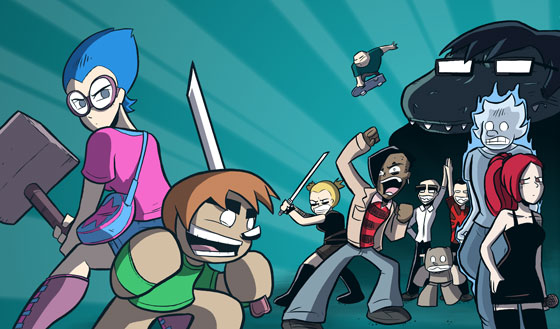