Just a reminder... the next batch of Book Club bonuses email out on Saturday, free to anyone and everyone who has a copy of my third book, Sam and Fuzzy Under the Influence. (If you'd like to score this bonus swag and haven't picked up a copy of the book, just nab one before Saturday and you'll be all set!)

This time around, I have two desktops, plus an inside look at a really weird old cancelled Sam and Fuzzy project that was going to look like this:

I'll also be including a poll where you can vote to determine what one of the next bonus desktops will be! So Book Club members: email me your ideas for future bonus desktop you'd like me to make -- character pin-ups, parodies, scene recreations, super-deep continuity references, or whatever else you think would be cool. I'll pick my favourite suggestions and include them in the poll. 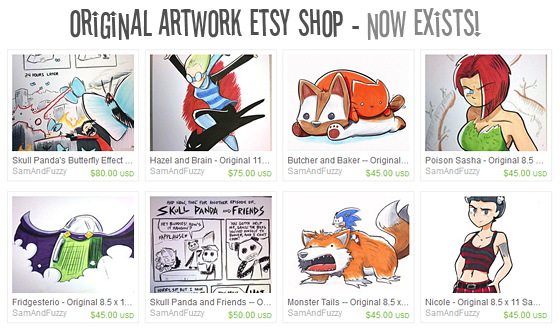