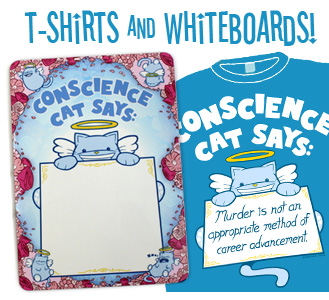 "Which desktop idea won the [...] book club poll for the next bonus pack?" -Mark

Right now, it is neck-and-neck between the fictional magazine covers idea, the Breaking Bad parody and the Ghostbusters parody. But there's still a few Book Club members who haven't voted yet! Speak soon, idle members, or forever hold your peace!

I think I might do the top two designs this time around, if only because I really like these suggestions!

"Are we gonna see some Soft Serv cameo in Sam and Fuzzy? …Will you at least trademark him before Sega does?" -William

Original character, DO NOT STEAL

"What is Mr. Tusk's qualification to be on the board? Judging purely by his attire, I'd guess he either runs illegal poaching operations, or an adventure supply store." -Duncan

Truly, the greatest mystery Sam and Fuzzy still has yet to explore. His attire does suggest a lot, but don't forget... he is also a Colonel! So maybe he's a military man, or possibly a fast food magnate.