Sam and Fuzzy Q & A: Omnibus Edition
Got a question you want answered? Just drop me an email with "Q & A" in the subject line!

"Will the one-off Christmas special strips be included in the Omnibus? And is there any chance it would include a page or two showing Sven and Fluffy? (Still my favourite ever internet April Fool!)" -LB

The massive Omnibus that we are currently kickstarting collects every Sam and Fuzzy comic I drew and published online up to strip #1045, including the Christmas specials and, yes, even Sven and Fluffy. (Albeit in black and white, of course.) When I say complete, I mean COMPLETE. Ha!

And thanks to everyone's above-and-beyond support, it now also includes the two exclusive stories from the old out-of-print Sam and Fuzzy minibooks, and a brand new intro story featuring the X-Per-S crew and Fridge. (And it is well on its way to including an insane new alternate ending made by myself and Rikk Estoban, featuring Carlyle and Future Fuzzy.) It's going to be a hell of a book!

"Is the new intro story [in the Omnibus] a remake or do-over of specific earlier comics?"-Sam

No! It is a brand new Sam and Fuzzy story set in the classic era, about Sam and Fuzzy undergoing a performance evaluation at X-Per-S taxi. It's an "intro" story only in the sense that it is the first thing in the book, and therefore introduces the core cast of the strip to the reader. But the story in a new one that fits in alongside the original comics, rather than retelling or replacing any of them. (Which is good, because all those comics are in the book, too... even Volume Zero, which is included in a special bonus section.)

"Why isn't Dev in the kickstarter cast print?"-Alice

The kickstarter cast print only contains characters that appeared in the comics in the Omnibus, which is why there's no Dev, Edwin, Rexford, or any of the other post-Noosehead characters. I did consider including them all, but quickly realized they wouldn't all fit. Actually, there are so many of them, they could fill an entire second print! (Who knows... maybe some day I'll make that one, too!) 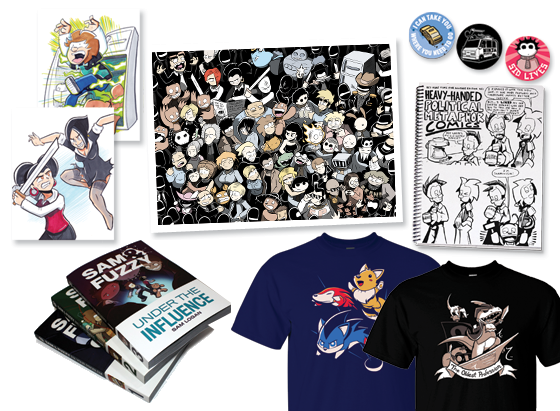