Just a reminder, team... I am not at San Diego Comic-Con this year! I am, in fact, on an actual proper non-working real-life person vacation, with mountains and geysers and dinosaur bones and everything. But if you're at SDCC, be sure to say hi to all my pals at the Topatoco booth!

Despite my vacationing, your regularly scheduled Sam and Fuzzy comics will continue uninterupted! (Although I will take the week off from the Q and A feature, if y'all don't mind.) Come back on Friday for our next comic!

Cameron Stewart and Babs Tarr have put together a pretty fun new costume design for the upcoming new Batgirl series. It has certainly inspired a lot of fan art since the day it was announced! In case you didn't already see it on my twitter or tumblr, here is my take: 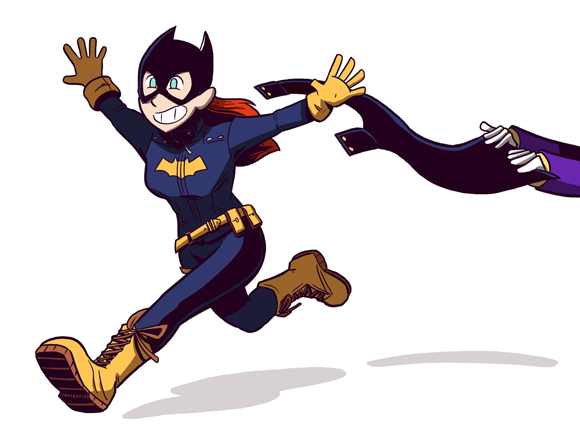 There have been some great roundup collections of various online artist's new Batgirl pieces at i09, Comics Alliance, AV Club, and Dorkly, if you'd like to see what other people came up with!  I rarely get to participate in these kind of internet fanart explosions -- I don't draw a lot of fan art! -- so it's been pretty fun to see my goofy drawing mixed in with all the other great pieces in these collections.