It's that time again, team! I'm so pleased by your support for our new print collection of Volume 4, that I've decided to upgrade the buyer digital bonus pack even further.

Now, in addition to the PDF copy of Vol 4 and four bonus desktops, everyone who nabs a copy of Volume 4 before Nov 1st will also get a PDF ebook copy of the Volume 4 Sketchbook. The sketchbook will collect all the fun, weird, and crazy pieces I've been drawing for people's Volume 4 limited bundles. It's already well over 30 pages long, but if people keep nabbing those limited bundle commissions, I'm going to have even more material to put in there!

Also, as an extra bonus prize, one lucky buyer is going to win the original 11x14 inked artwork for Volume 4's back cover. If you'd like to nab all these bonuses and get entered into the draw for the art, just pick up any version of the book before November 1st. Woo! 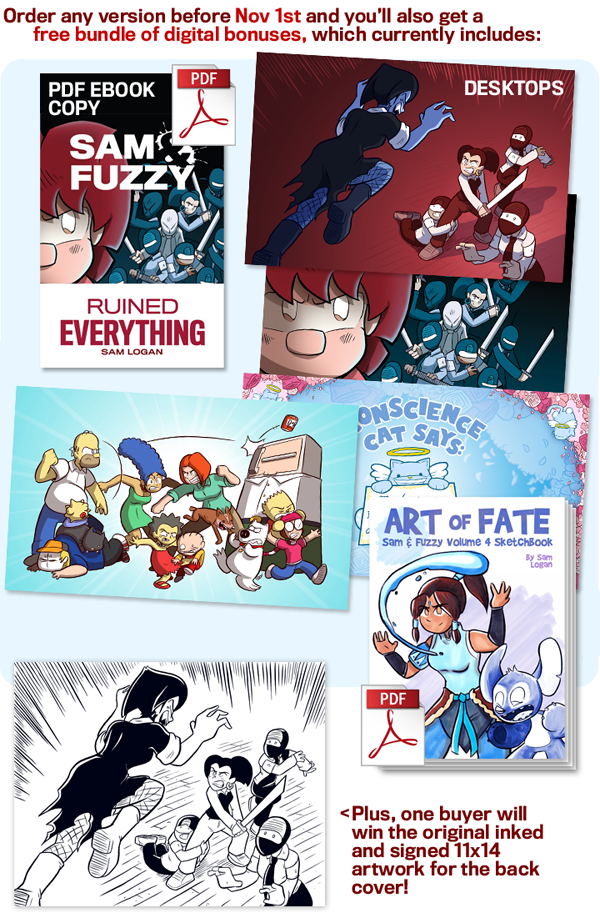 A new week is upon us, friends! And in addition to another batch of new comics, I believe my new t-shirts will also be dropping! I will keep you posted.

By the way, is anyone out there experiencing any commercials in the sidebar with annoying auto-playing audio when they browse the Sam and Fuzzy site? It seems a couple are sneaking in for some users. This is not supposed to be, so if it is happening to you, drop me an <a href="mailto:[email protected]">email</a> and let me know what they were for so I can block em! (Don't click 'em though.)