Sam and Fuzzy Q & A:  Hairy Edition
Got a question you want answered? Just drop me an email with "Q & A" in the subject line!

"Is Dev's hair clear in the front? How does she get it to do that? Can anyone's hair be clear if it gets in the way of their face?" -Jeremy


This is a stylistic quirk -- or bad habit, as some might argue -- that I picked up from a youth of anime-watching.

The logic, I suppose, is this: in real life, when a person's bangs hang in front of their eyes, you can often still partially see their eyes between the individual strands of hair. But in a cartoon where bangs have been simplified into a single solid shape, you represent that partial visibility by depicting that solid shape as sort of semi-transparent.

I know some cartoonist who absolutely loathe this technique. I (as you may have guessed) am pretty OK with it.

As for what colour Dev's bangs actually are, I usually colour them as a dark brown that's only slightly lighter than the rest of her hair looks, just because it's thinner. I don't think she dyes it or anything.

"Is the owner of the Kiwi Cola brand a member of the Committee? And if so, who?" -Kennet J

Kiwi Cola is a more-orless regular surface corporation with a "civilian", Underground-ignorant CEO. But like a lot of major surface corporations, several of the Committee's wealthier members -- like the Graves Group and Paxton -- are major shareholders. Meanwhile, like a lot of surface products, Kiwi Cola is imported, market, sold in the Underground by Rexford Industries. (You can learn more about this, of course, in the gigantic Sam and Fuzzy universe guide in the Underground RPG gamebook!)

"Hey Sam! I've bought all your books, and I'm excited for the RPG. What RPGs do/did you play, and how did your relationship with DTD begin, did you have some ideas for the mechanics of a S&F game already, or did you put it in their hands?" -BagelDenzien

This is actually a question from our recent AMA! But it was a good one, so I thought I'd repost it here.

The folks at DTD actually approached me, with a set of mechanics and concepts that they'd come up with themselves! And honestly, I was just so impressed by how well their ideas and systems meshed with the Sam and Fuzzy universe that I just had to say yes. We've been working on it together ever since. It's been a really cool, almost symbiotic relationship -- in general, I provide the lore and art and they provide the game systems and mechanics, but there's been a lot of feeding off of each other, with an idea from one side providing inspiration for the other.

The RPG I played most as a teenager was TMNT and other Strangeness! (It was based on the original Ninja Turtles comic books.) I really liked that game, and I loooooved all the lore-and-art-filled gamebooks... which was a big influence on me packing as much of both of those things as possible into our own game.

As an adult, I'm currently playing a regular D&D 4th ed game, although we're in the process of transitioning it to 5th.

We return on Monday for the start of a new story, and the final week of our Kickstarter! See you then.

Today at 10am pacific (1pm eastern), the devs of the Sam and Fuzzy RPG and I will being doing an Ask Me Anything on Reddit! I'll post a link here when the AMA is live. (edit: It is now live! GO GO GO!) Come on by and watch us answer all your questions about the game, the S&F universe guidebook, the comic, and whatever else crosses your mind!

And don't forget, international friends... tomorrow (Dec 4th) is the last day you can order any of my Topatoco swag with non-express shipping and recieve it in time for Christmas. After tomorrow, international orders will need to use express post for timely ho ho hos!

Friends! A couple of important dates are looming.

First of all... Topatoco has posted their 2014 Holiday Ordering Deadline guide! If you would like to order any of my books, shirts, or other swag, this will let you know when you need to order (and what shipping methods you need to use) to get it in time for Christmas. The first looming deadline, for international buyers, is December 4th: after the 4th, you'll need to splurge for Priority Express mail to get your parcel before Christmas.

Secondly, on December 3rd (this Wednesday) at 10am Pacific/1pm Eastern, we'll be hosting a Reddit Ask Me Anything about the Sam and Fuzzy RPG! This will give us a chance to answer any and all of your questions about either the game itself or the expansive Sam and Fuzzy universe guidebook.

It's a big project, but I've been previewing little bits and pieces of it via our Kickstarter updates. Over the last week or two, I've posted a guide to our character creation system and some sample pages from our jobs section. And on Friday, I posted some sample pages from the guidebook section! You can check it out by clicking the image below. 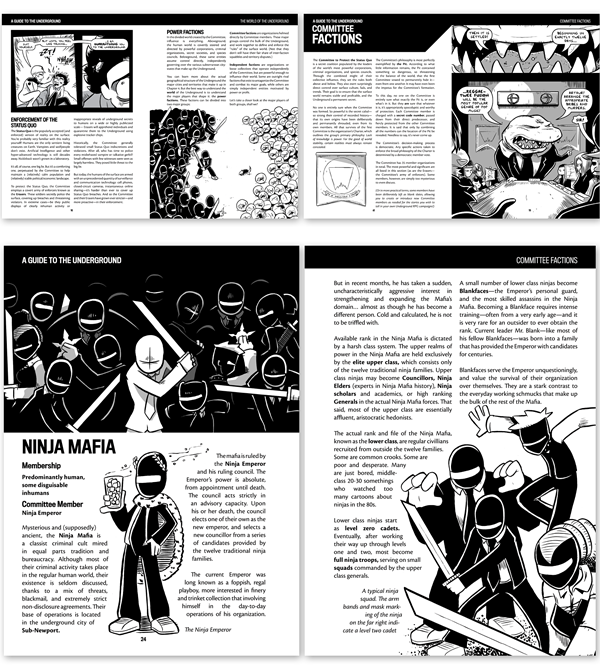 The last thing we'd like to do before the campaign ends is record a sample playsession of the game -- we're working on that now! After that, I'll feel like we'll have given folks a pretty solid general impression of the project, but we're eager to answer any specific questions you all might have. (Hence the Ask Me Anything!) So start your brainstorming.