Whew! It was a heck of a campaign, friends, but when all was said and done, we managed to raise 200% of our goal for the Sam and Fuzzy RPG kickstarter! Thank you, everyone, for your incredible support, and for helping us secure so many awesome additions to the project. When all is said and done, I think we're going to have a pretty fun game AND an awesomely thorough guide to the Sam and Fuzzy universe!

And with that, it's back to business as usual! (Well, as usual as it gets around here.) I've got a full week ahead of me working on the game, drawing next week's special season comics, and trying (most likely in vain) to find a friggin Diddy Kong amiibo. Tough cartoonist life! See you on Wednesday.

This is it my friends... the final day of the Sam and Fuzzy RPG Kickstarter!

It's been a pretty crazy ride so far. And amazingly, thanks to your incredible support, we've been able to introduce yet another stretch goal... adding a new section to the universe guide expanding on some of the Committee's more... unusual members! 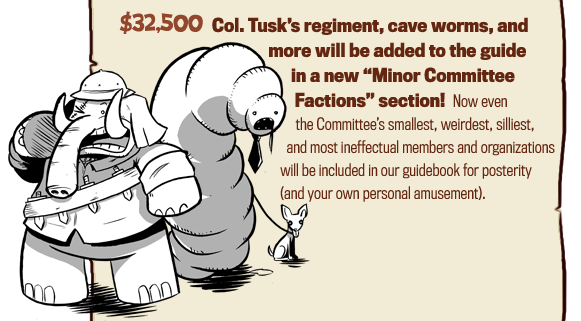 Keep in mind that, thanks to the support of our backers, we've already been able to expand the project to:

-Introduce the comic's never-before-explored Squid people, and the history of their faction, the Kalamari Dynasty!

-Make Shapeshifters playable, and adding their secret history to our universe guide!

-Add a special exclusive Sam d6 to all our bonus packs!

-Add a bonus chapter with an optional conversion to the FATE ACCELERATED gameplay system!

This is what I love about Kickstarter... being able to translate backer support directly into more cool stuff! Not only will we be able to make our game... but we're able to make it even bigger and better than we'd originally pitched! As for how much more... well, we'll see what the last day brings!

(And don't forget, original art fans... there are also a handful of exclusive giant art pieces and a few remaining custom commission tiers, if you are interested. Check em out!)

Three days left for the Sam and Fuzzy RPG Kickstarter!

It's true! The kickstarter for our combination game and Sam and Fuzzy universe guidebook is almost over. But big things have been happening in these final days!

First of all, we hit our Shapeshifter stretch goal! That means Jess Star's people -- the mysterious shapeshifting slugs -- will be added to the game as a playable species. It also means I'll be adding a new subsection to the universe guidebook dedicated to the slugs, their secrets, and their incognito committee member. I'm pretty excited about this! It's something I've wanted to dig into for a long time... I've just never had the right place to do it!

But that's not all. We've also almost hit our next stretch goal, too! We're only a stone's throw away from throwing a free kickstarter-exclusive Sam D6 die into every tier that includes one of our "gilded" bonus packs. How rad is that? Pretty rad!

Will we get there? And will we hit our big 30k stretch goal, where we add a whole second playable campaign (about cyborgs and Buddy Bears!) and an optional conversion to the FATE system? I'm not sure! But we've recieved a pretty incredible amount of support so far. Let's see where the final days take us!