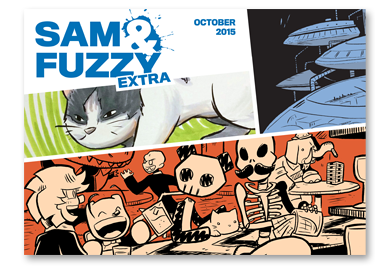 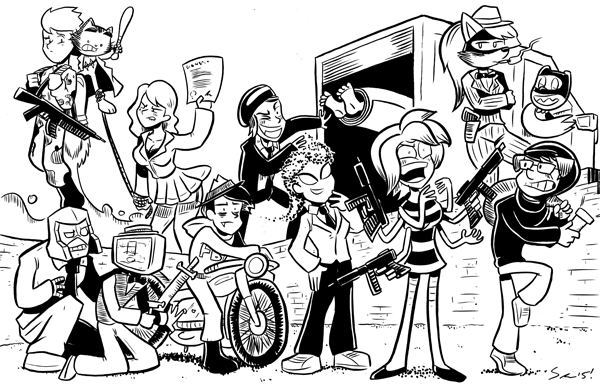 Sam and Fuzzy Q & A:  Heatbag Edition
Got a question you want answered? Just drop me an email with "Q & A" in the subject line!

Yes, he heard him!

For those who don't know (or who have forgotten), "heatbag" was the preferred derogatory term used by Fridge, the Sam and Fuzzy series' (presumably dead) first major antagonist. So Brain's use of it almost certainly signifies... uh... something. But what?

I recieved, like, a billion Fridge-related questions over the last couple of weeks, in which readers proposed a broad array of theories. Some were very straight forward, while others were extremely complicated and outlandish! All I'm going to say is that at this point, I'm pretty sure all those same theories are currently running through Sam's throughly confused noggin.

"So, which are you more excited for in 2016: Batman v Superman: Dawn of Justice or Captain America: Civil War?" -Joe

To be honest, I'm getting a little burned out on all these superhero movies at this point! But Chris Evan's Cap is my favourite MCU character, and the Russo's Winter Soldier was one of my favourite Marvel films, so I'm definitely still curious enough to go see another film from that team.

Batman v Superman is one I will probably skip unless the reviews are incredible. I really didn't like Man of Steel at all, and I'm not a big fan of Zack Snyder at the best of times, so I don't think it's going to be for me. He just seems to take his films a lot more seriously than I am able to.

"Given Sin's frequent disparaging remarks about 'primitive push-button technology,' why on Earth did his robotic body include a large control panel with numerous buttons?" -Erik

Sin's exosuits are actually primarily controlled with a mind-reading interface built into the top of the skull. So I'm not actually sure what the control panel is for! It might be a redundant secondary interface in case of machine error. But on the other hand, it might also just be a big library of wacky pre-recorded sound effects. I guess now we'll never know! :(

"Between X and Y, is X the more loyal? After all, he did remove his own arm in a bid to protect the emperor back when the two of them were tricked into thinking the other had betrayed Sam. Second question: If X were to ever learn that Sam is not the true heir to the throne, would he become Sam’s enemy for having made his sacrifices to a false leader?" -Jake

Regarding the former: I think X and Y are equally loyal, but X is more willing to go to extreme lengths in general. Y wouldn't ignore a direct order, but he's less brash and his self-preservation instincts are a little stronger.

That's a wrap for this week, team! Come back on Monday for our next strip!