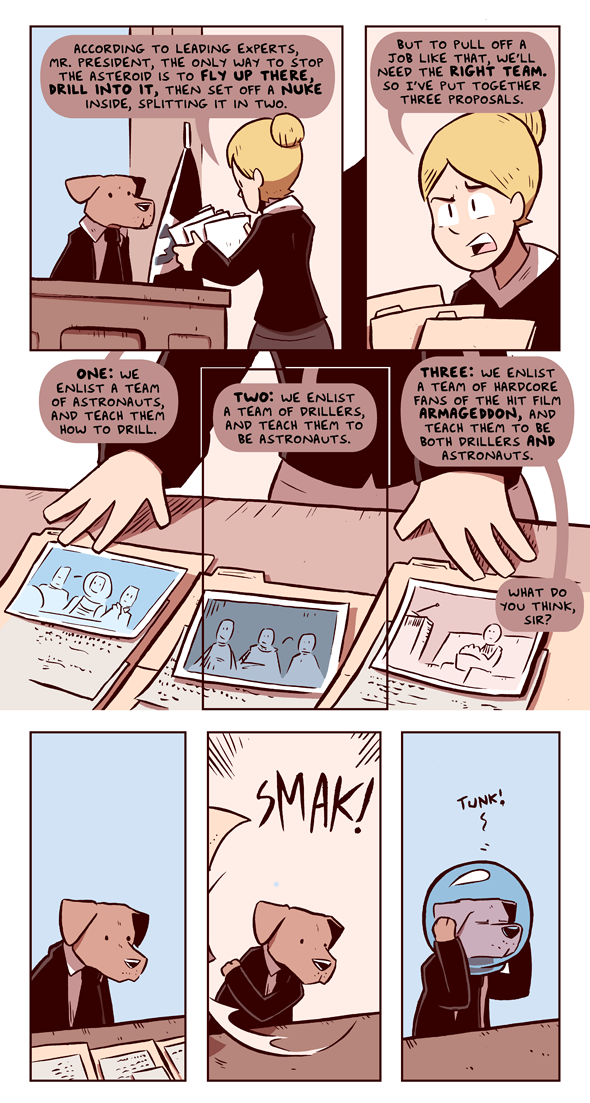 Don't want to miss a thing

I promise I mean no disrespect to the cinematic masterpiece that is Armageddon. After all... it has a Criterion edition. So it MUST be good, right?

The epic conclusion to this saga arrives on Friday. And after that, we'll be checking in with our favourite shape-shifter. Stay tuned!

I hope you all enjoyed the big flashback story, team. I certainly enjoyed making it! But after tackling such an enormous (and in parts, fairly heavy) tale, I thought it'd be nice to briefly break for some sillier, stand-alone material. It's a chance to do some lighter work with some of our many side characters for a few updates, while I prep up for our next big tale.

First up: the return of President Dog! And this time around, for no particular reason other than that I felt like it, I decided it'd be fun to chronicle the President's exploits in the traditionally verboten FULL COLOUR. (Ahh!) Try not to be too scared!

Come back on Wednesday for our next strip!

Sam and Fuzzy Q & A:  Band Edition
Got a question you want answered? Just drop me an email with "Q & A" in the subject line!

"This is more of a 'refresh my memory' than a question, but with all the flashbacks and plot progress, I kinda forgot something critical… where is the Band of Wazoolah again? I just realized that if Brain didn’t pull the code from Hart, then if they never took the Band back, Hazel and Brain don’t actually have the Ninja Mafia code, meaning they are missing two codes, not one as everyone else seems to believe." -Anthony

Happy to refresh, Anthony. I wouldn't blame anyone for losing track, especially when the comic has been serialized over such a long period of time!

The last time we saw the band, it was in the possession of Mr. Sin, who used it to learn the number... and then scratched the number out, making it useless. (What a jerk.) However, the number was not lost! Sam was able to pull it, as well as Sin's own number and the numbers he aquired from Brain, from the database in his exosuit. And Brain... Brain got them the gruesomely direct way. (Yikes.) Long story short, that's how both Brain and Sam wound up with the same library of codes as one another!

"Considering how long you've been doing a webcomic like Sam & Fuzzy, was there ever a point in your life where you thought of taking a break from the webcomic scene and try writing and/or drawing for the big guys, namely DC Comics or Marvel Comics (or maybe even IDW Publishing)? Personally speaking, I wouldn't mind seeing you take on one of the more weirder titles like DC's The Doom Patrol, The Creature Commandos, or Marvel's Agents of Atlas." -Joe

Broadening out into other venues is something that's been on my mind more and more as we slowly lumber ever closer towards the big conclusion of the "NMS series" S&F arc that I started way back with Fix Your Problem. I would never want to give up doing my own comics entirely, but it would be nice to branch out into other things at the same time.

I certainly would enjoy doing some work on a Marvel or DC property that I liked! But generally speaking, those publishers only work with writers and artists who have an established track record working with one of the smaller print publishers first. So if I did decide I wanted to try and crack into that space, that's probably where I'd need to start. It's not something I'm working towards right now, but in the future, you never know!

"Were you playing on this trope when Candice was defeated by Fridge? It's not really fridging, considering that Candice played a very active role in her death, but it still could be you alluding to it." -Agni

I don't think anything I ever did with Fridge was an intentional reference to or commentary on the "women in refrigerators" trope. But you can't help but make all sorts of unintentional ones when you have a sentient Fridge in your comic! There's even one early strip where Alexa is literally trapped inside Fridge for a while.

OK, friends... that's a wrap for this week. Come back on Monday for some more fun stuff!