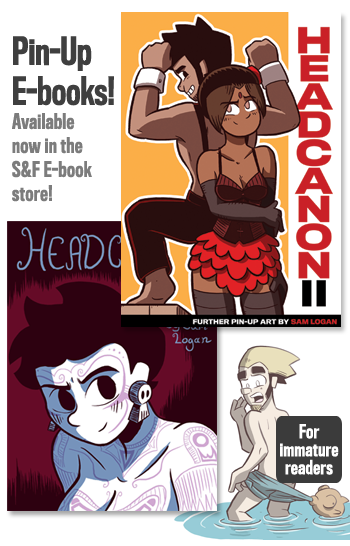 Today: a brief appearance from Carlos and Kendall! It's been a while since we've seen either of them. (If you'd like to refresh your memory, you can find all their previous appearances by clicking those links!)

We return on Friday with a new round of reader Q and A! If you've got a question you'd like me to answer -- about the comic, or my other work, or the world beyond -- just pop it in an email with "Q and A" in the subject line!

Not a lot to say down here today! But hey, in case you missed it: here's a the first batch of bonus art I drew based on randomly-selected suggestions submitted by my Patreon backers:

It's Nicole as an (original) Steven Universe gemsona, Dev as Overwatch's Pharah, and Fuzzy as... naked Fuzzy. I'll be doing another batch later this month based on some of the other suggestions backers sent in... I'll post 'em here when I do!