It's been a long time since we checked in with old Buddy! As you can see, he's doing great... although the events of Buddocalypse may have expanded his ambitions somewhat.

I'll be at Calgary Expo starting tomorrow! If you're going to be at the show, be sure to come see me, Alina, and Jeph at booth 417. (It is close to our usual spot, but rotated 90 degrees from previous years!) 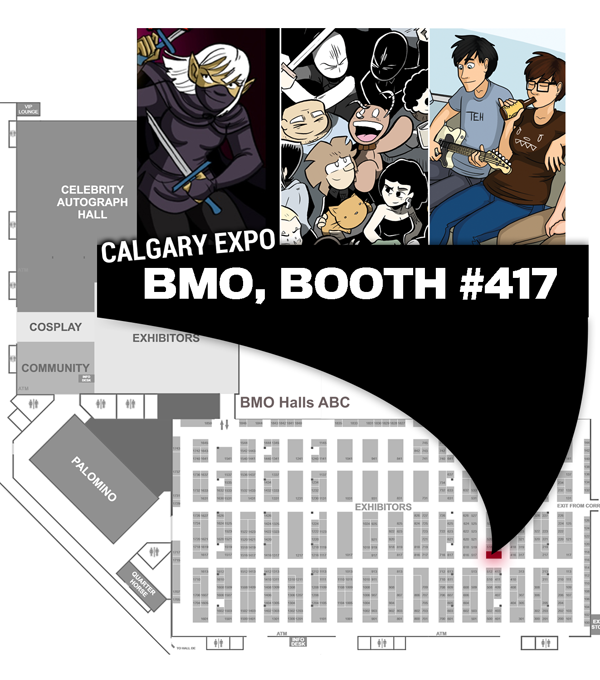 Come back on Friday for our next comic. See you then!

How did Gertrude take over the Saucy Hippo? I think I know, but it may be one of those "noodle incident" type situations, where it's better to never really know.

This week's comics are full of surprises! Come back on Wednesday, when we check in with a different corner of the S&F universe and visit a long absent pal.

And if you're going to be in Calgary this weekend, you should definitely come see me at Calgary Expo! It'll be swell.

Corporate Cat returns! It seems they've been having some problems with the Flvr app. But don't worry! It's not more dangerous than licking your phone already was.

Sam and Fuzzy Q & A:  Harty Edition
Got a question you want answered? Just drop me an email with "Q & A" in the subject line!

"What gender would you say Brain & Hart are? And why?" -Lemma

Brian and Hart are male! There is absolutely no good reason for it. I guess you could retroactively argue that they were surrounded by men when they were "developing", but that wasn't an intentional implication. They're just dudes because I assumed they were, and that's how they've been referred to in dialogue in the comic.

To be honest, if I could go back in time, I would have made Brain female. No difference in any other aspect of the character... people just would have referred to Brain as "she" instead of "he". I just feel like cartoon characters who have really abstract designs that aren't overtly gendered always wind up being male by default. Take my beloved Skylanders, for example! There are lots of female humanoid and animal characters in the Skylanders games. But anytime there's a really inhuman character with no obvious visible gender -- like a talking soccer ball, or a wind-up toy, or a one-eyed mushroom with arms -- they always wind up being a dude.

It seems really silly to me, because those kinds of characters are some of the most fun parts of cartooning! So it seems very strange to limit them almost entirely to male characters. And yet, despite how often I complain about this, when I went to create Brain, it never even ocurred to me. Whoops! Something to work on in the future, I guess.

"Since it seems we are nearing the end of this epic adventure, do you have webcomic related plans for the future? Start something fresh ans new, creating a new story but in the same universe, or just leave it all and do something completely different?" -Nathan

I'm not sure yet! There are quite a few different things I'd like to do, both within the S&F universe and outside of it, and I'm not sure which one(s) I'll jump into first. But rest assured, whatever I do, there'll still be new comics coming to this here website... and odds are, if you liked all the vastly disparate material I've run on here up 'til now, you'll probably enjoy that stuff, too!

"Real quick question for the apiring web cartoonist: How do you go about making your speech bubbles and lettering? It’s something I’ve tried to work out myself in Photoshop, but I can’t find a quick and easy way to make clean and consistent bubbles." -Bradley

Personally, I do my lettering in Photoshop, but I know a lot of folks who do it in Illustrator! But for me in particular, I developed a method that roughly matched my old hand-drawn balloons in the first few hundred comics, from back when I did all the lettering on paper.

I make the body of the balloons using the shape tool, and the tails using the pen tool. (The particular "squooshed circle" shape I use for the bodies is a custom one.) Once I have all the balloon bodies and tails drawn as solid vector objects, I flatten them onto one layer, select 'em... and then on a separate layer, fill that selection white and use the stroke tool to stroke it with a black outline. That creates rasterized, evenly outlined balloons that look similar to the ones I used to draw by hand with tech pens.

That's all fine for me, but most creators are not trying to deliberately match their old hand lettering, and will prefer to keep their balloons in vector form for easy editing and crisp printing. For advice on more "traditional" digital lettering, you might want to turn to Google. There are lots of great tutorials out there that will pop up in the earliest results, either for the Adobe programs or Manga/Clip Studio.

What gender would you say Brain & Hart are? And why?