We return on Friday with a new comic and a new round of Q&A. (As always, if you've got a question you'd like answered, just pop it in an email with "Q and A" in the subject line!)

But meanwhile, it is time... time for my weekly plug of our BIG SALE on S&F Omnibuses and Vote Dog books! I believe the plan is to wrap this sale up in July, so if you want to get in on it, now is your chance! The deals to be had ARE:

All these books are packed with fun bonuses and exclusives -- Omnibus I, II, and V in particular, as well as Vote Dog, have a ton of bonus comics and art that aren't available anywhere else. Enjoy!

In case you missed it, I posted a goofy drawing of Rex and Tusks bowling over on my instagram. (It was originally a Patreon bonus drawing!) I'm going to try and post a little more actively over there... I've got lots of fun stuff to share!

Meanwhile, over here, we return on Wednesday with our next comic. Be there!

Sam and Fuzzy Q & A:  SATAN Edition
Got a question you want answered? Just drop me an email with "Q & A" in the subject line!

"Why did you decide to stop using grey shading in the most recent comics? It's a little jarring after so many years of greys!" -Alex

Since the tar is kind of a metaphorical stand-in for ink, I thought it would be fun to keep this entire "inside the tar" sequence -- including all the tar-constructed visions of possible realities -- in pure black and white. I think the swooshy black-vs-white visuals are extra striking this way, and will be even moreso in print form, when it is actual literal ink filling the page. (Or barely filling the page at all, in the case of the white-bordered sequences.)

Plus, it's a fun little throwback to the look of the Classic and Noosehead eras of the comic, which seemed like an appropriate thing to do at such a climactic point in the run of the series!

"In comic 706, you say Black was Blank's protege. Wasn't that contradicted by later comics?" -Joseph

You know, probably at least a little! I mean, it's technically true that, when Mr. Blank became the head blankface and Black became his number 2, it would have become Blank's job to train Black to replace him in the event that anything ever happened to him. But it's probably still a little weird for him to use the word "protege" to describe someone he went to school with. It probably would have been more appropriate for me to have him say "subordinate".

"In one of the most recent Saucy Hippo drawings [on Patreon], Sam/Crush appears to have a big 'SATAN' tattoo on his chest! When the heck did he get that? Was it to impress Nicole? (Or was it just a temporary tattoo?)" -Chris

Ahaha, this is a fun question! I can't repost that full image here or my ad providers will abandon me forever, but for those who don't subscribe to (or care about) my pin-up stuff, you can see the relevant part of the drawing Chris is referring to in the preview ad further down in this post. And it's true... Sam does indeed have a big "SATAN" right across his chest!

But it's no ordinary tattoo... it's actually the "mark of the devil" left from the time that Fridge/Hart posessed Sam. Fridge had a tendency to brand the people he posessed with the phrase "SATAN WUZ HERE", and Sam was no exception.

By the time Sam started dating Nicole, he had already paid to have the "WUZ HERE" removed, leaving him with just the "SATAN" part. He has had the rest of it removed in the time between Noosehead and Fix Your Problem. (It was prohibitively expensive to do all at once!) That's right... even my pin-ups are full of pointlessly thorough continuity! 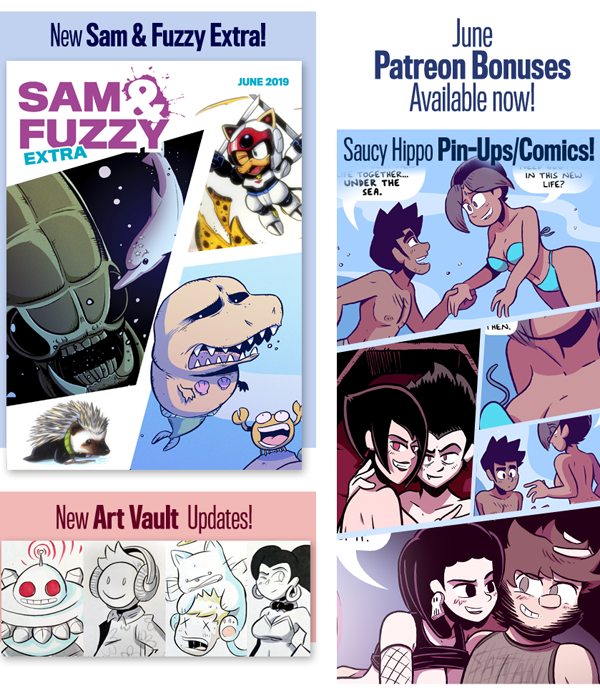