Torontonians: If you're going to be at Fan Expo Toronto this weekend, come see me and my pal Peter at booth 541! I'll have a broad array of books, pins, shirts, and other goodies. And as always, I'll be doing lots of original art commissions, too. 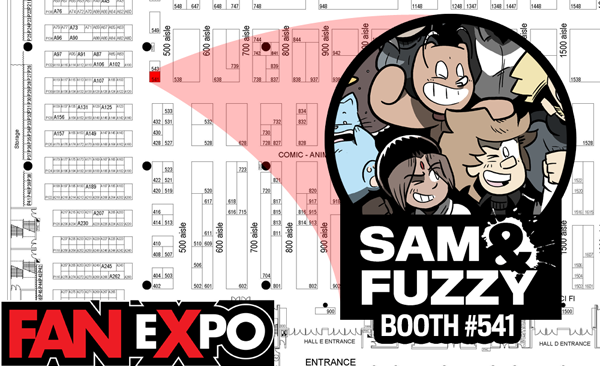 We return on Friday with our next comic. See you then, team.

The new Invader Zim movie is out on Netflix, and it is so good! It is, without question, Invader Zim being the absolute best version of itself, taking everything that was great about the original series and plusing it aggressively with deeper stakes, ambitious visuals and sound, outstanding vocal performances, and some of the best gags the series has ever seen. I recommend it heartily to both Zim fans and newbies alike.

Meanwhile, I wrote a big four-issue storyline for the Invader Zim comic book, which will be kicking off later this month! Like the movie, it's a bigger, more "feature length" Zim adventure than the series usually gets to tackle. So if you enjoy Florpus, or my stuff, or both, be sure to check out Invader Zim 46.

Come back on Wednesday for our next comic! And if you're going to be at Fan Expo this weekend in Toronto, come see me at booth 541!

Sam and Fuzzy Q & A:  "The Demon's in the Details" Edition
Got a question you want answered? Just drop me an email with "Q & A" in the subject line!

"If I remember correctly, you implied, if not directly stated, that there used to be more tar demons that Hart and Brain consumed to live as long as they did. My question: where did these demons come from? Hart and Brain were the only two we saw in the lab. Did you have an origin in mind for the others, or is that left to the reader's imagination?" -Joeseph

I like leaving it to the reader's imagination! But the general idea is that demons are created whenever tar is gradually exposed to low levels of ambient thought... thoughts too weak to fully transmute it, but strong enough to leave an impression, causing it to grow a "personality".

Hart was inadvertantly made in a lab, from tar stored behind imperfect sheilding. Brain was (probably) formed inside the tank that was hidden deep in Rexford's basement for years. Other demons may have been created by previous human researchers from other parts of the world... or, they may have grown in locations where some pocket of tar was the right distance from surface civilization! I'm not sure exactly how many times it's happened, but clearly, it was frequent enough to help form the S&F universe's demon-based folklore. (And to Brain some things to eat!)

"Does Carlyle have a secret brother called TARlyle that's about to be revealed as the true final villain and somehow the true creator of the tar?" -James

Damn it! Who told you? You just spoiled the big reveal of my next comic project! Now I'll have to think of something else to make a comic about. Thanks a lot.

"I don't remember if this has been asked before, but Fuzzy lived a long time in the above ground. Given the comic didn't originally have a whole lot of inhumans during the time he and Sam drove taxi or worked at the bookshop, did people think he was some guy in a fur suit? Someone had to think it was weird there was a talking teddy bear." -Taylor

Hazel actually explains her theory about this waaaay back in one of the "first" times she and Fuzzy talk! The humans of the S&F universe don't know about inhumans -- or at least, they didn't until recently -- but they also don't want to look stupid. Fuzzy acts like he's supposed to be there, so people just... assume there's a reason for why he looks like that. Fuzzy refers to it as his "condition"... and when he becomes a celebrity, reveals that condition is known as "acute ursus facial syndrome."

That's a wrap for this week! Come back on Monday for our next comic.