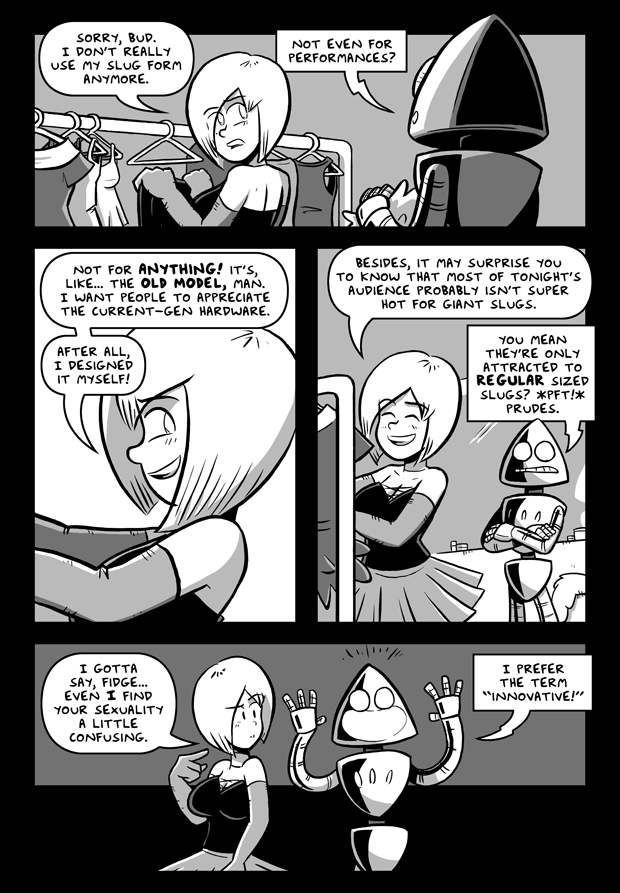 Aaaaaand we're back, with the next installment of our "Whether Permitting" story! Here's the page we left off on before taking a break for holiday programming. (And here's where the story starts!)

Also returning this week... our traditional Friday Q and A column! If you've got a question you'd like me to answer, just pop it in an email with "Q and A" in the subject line. (Or tweet it at me.)

See you on Friday with our next comic.

It's true! The first page of Sam and Fuzzy -- or at least, the first page of the version that became this webcomic -- was drawn way back in 2001. I drew it for the University of Victoria's student newspaper, The Martlet. Then in 2002, I ran it here on the Sam and Fuzzy website as my very first update!

The nature of S&F's sliding timescale can be a little bizarre. It's not as weird as it could be, since the comic isn't filled with a ton of topical references. But it does still lead to some weirdness... like Hazel using a smart phone in this flashback to the Classic era, even though the original Classic era strips were drawn before smartphones existed.

All right! I hope you have enjoyed all this weirdness. But we're nearly ready to resume our current story! Come back on Wednesday for our next comic.