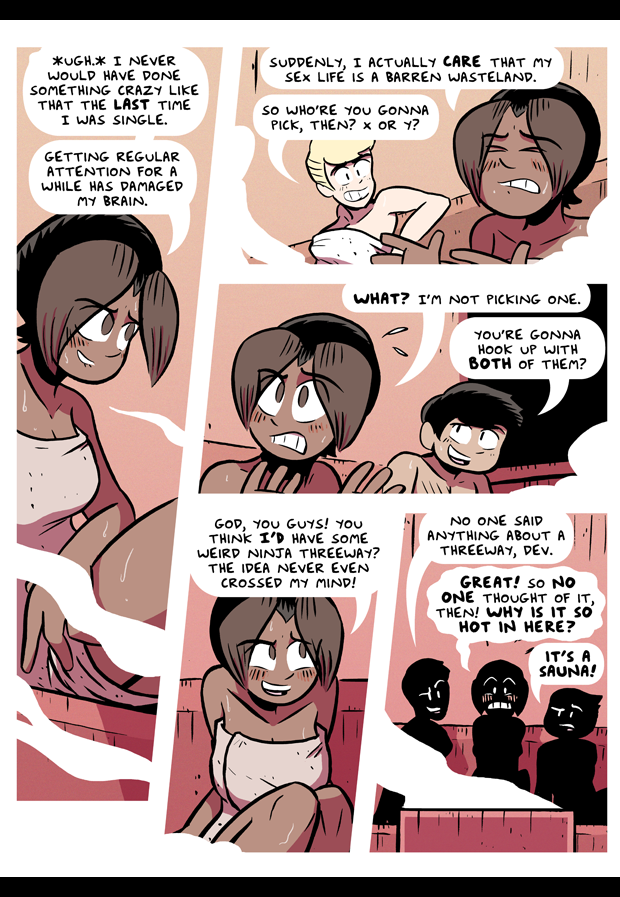 EDIT: Sorry for the late comic today! It was all queued up, but for some reason it just... didn't post! Eesh.

I guess it's actually been a long friggin' time since we saw Carlos and Kendall, Dev's former fellow Ninja Mafiosos. In case you were wondering, they do indeed both still work for the ninjas... or "Dupont Security Personnel", as Gert calls them now.

Meanwhile: Teepublic is having another sale! Until November 6th, all my classic t-shirt reprints in my TeePublic store are only $13! You're also able to get the designs on other kinds of shirts, as well as products like totes and phone cases. Woo!

Like Game Night, this story originally appeared as part of the exclusive ongoing Saucy Hippo comic series that I publish on my Patreon. That series is mainly focused on NSFW stories and art, but these particular comics were mostly PG... and also contain a minor plot development that I want to reference in a future story. So, like Game Night, I decided to lightly "remix" these comics so I could share 'em all with you here!

For one last little bit of Halloween fun, here is a very silly comic about Sonic costumes that I originally made for my Patreon a couple of months ago.

Yes, for reasons that are hard to explain, real-life NASCAR racer Danica Patrick really was a playable character in Sonic & All-Stars Racing Transformed. If you didn't know that before, you do now, and you just have to live with it.

Come back on Wednesday for another comic! POW!