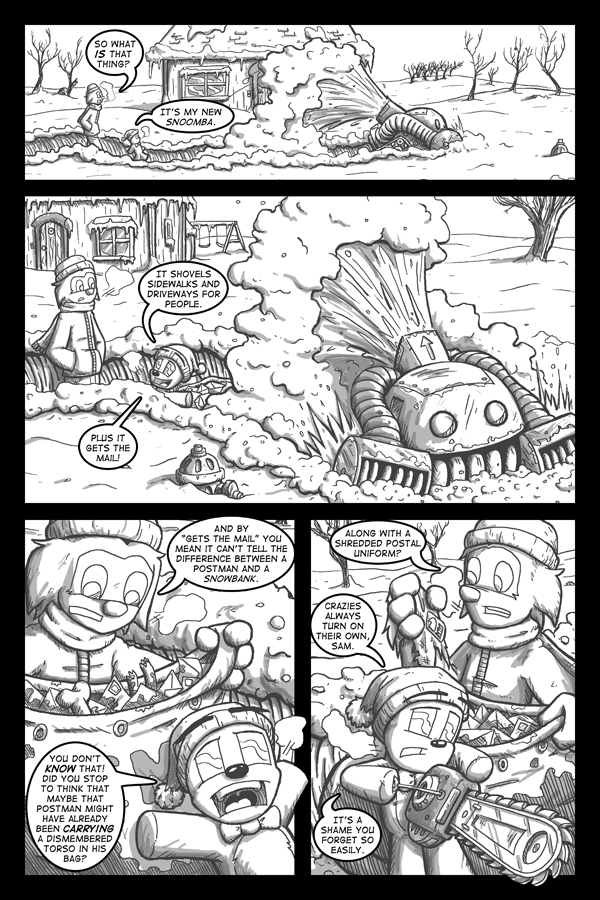 
And that's why you should always leave a note!

Today's comic comes by way of Radioactive Panda's Eric Johnson. I love Eric's art more and more every time I see it. Actually, it's vaguely threatening to watch how quickly it improves over time. It was good enough before. Now it just makes me want to cry.

I finally got around to seeing King Kong last night. Here's my two word review: too much. Too much action, too much inaction, too much emotion, too much weighty seriousness, too much over-extended dramatic pause, too much characters-gazing-at-each-other-meaningfully, too much look-at-all-the-crazy-bones-stuck-in-my-face, and way, way too much acting. There might have even been too much of Kong fighting dinosaurs, and let me tell you... it is really hard to have too much of Kong fighting dinosaurs. I think I read somewhere that Peter Jackson has wanted to make this film his whole life. Well, it certainly doesn't look like he ever wanted to stop making it. I eagerly await the DVD release of the extended 15-hour version.

But seriously, folks! As much as I enjoy picking on it, I did still enjoy the film for the most part. Kong himself was incredible... I'm somewhat famous for despising CG characters mixed with live action, but I believed Kong. Just watching him move was amazing. They really managed to capture that organic jerkiness and twitchiness that's missing from most CG characters. I don't know if it was something the animators added or just a result of improved sensitivity in mo-capping, but that extra subtlty really made him seem real. The facial animation was incredible, too. I think he gave the most nuanced performance in the film!