Wow! Sounds like folks are already starting to receive our new swag items in the mail. What can I say? Topatoco's team of enslaved elves work quickly!

I'm always eager to see my stuff in the hands of (hopefully) happy people -- and am particularly excited to see what folks are doing with the magnets and whiteboards -- so if you've got a camera and the inclination, email or tweet me your photos! Unless they're incredibly disturbing. Then send them directly to Jeph.

We return on Friday, with a new comic and a new round of Q and A. In the meantime, don't forget to check out Love Me Nice, and the guest strip of mine that it's archive now contains. Odds are high that you will dig this business.

Hey! Did you all see the guest strip I put together for Amanda Lafrenais' Love Me Nice on Friday? For those who don't know, Love Me Nice is a lushly illustrated black-and-white comic about the sordid private lives of the cartoony stars of a wholesome family television series. (I don't know why, but for some reason, I feel like Sam and Fuzzy readers might dig that kind of thing!) You can read the full guest strip by clicking the preview image below:

You can also find the guest strip Amanda drew for me right here! Now we are even.

Sam and Fuzzy Q & A: Three-Days-Late Edition
Got a question you want answered? Just drop me an email with "Q & A" in the subject line!

"I want to make webcomics, and one of the hardest parts for me is figuring out resolution and how it will affect my work when I put it on the web. (I work at 600 DPI and I've heard that most Web images are 72 dpi, yikes!) I know you do most of your work on paper, but could you explain a little bit about how you prepare comics for internet consumption?" -Jack

Absolutely! Because man, this is super important information that every webcartoonist should know right from the get-go.The last thing you want to do is make three years of web-resolution strips and then find out... argh... that prints and books require much larger versions!

You can find a detailed breakdown of how I do my linework scanning in the Q and A post right over here. It's a million years old now (which is probably why you haven't already seen it!), but that's still how I do it and the info is still accurate. Hope it helps!

"These recent Noosehead strips are making me wonder if you've ever thought about teaming up with Jeph's Dethmøle to make a Noosehead song or two actually happen in the auralverse? Because that'd be SWEET. " -Roo

Actually, Jeph was going to help me record one! I wrote the guitar part for him and everything. But unfortunately, Jeph has been too busy murdering hobos and enslaving orphans to actually record it. (Or alternately, I suppose you could say he's just been too busy with his own music or something.) I should bug him about it again, though. Maybe now is the time!

"What question would YOU most like to answer? There must be something you're dying to see pop up in your inbox so you can finally unleash your super-well-thought-out, riddled-with-backlinks answer." -Kim

Well, geeze, Kim... if you're going to give me an opportunity to pat myself on the back, I suppose I should take it!

But to be honest, I'm having a hard time of thinking of any truly genius-demonstrating question! (Possibility because of the extremely limited amount of genius available for demonstrating.) But I don't want to leave you high and back-link dry. So here's one little tidbit of continuity trivia for our nerdier readers:

Back in this comic, Fuzzy and Hazel were caught in the middle of the "Ruxpin Maneuver" -- a thieving strategy where Fuzzy poses as a teddy bear in order to loot safety deposit boxes. Hazel suspects the authorities caught on because they had overused the maneuver, but Fuzzy doesn't see how the two robberies he remembers qualifies as "overuse". That was one of the little hints that Fuzzy and Hazel were actually working together long before he lost his memory -- there were other, earlier Ruxpin robberies that he doesn't remember.

OK! How was that? Suitably obscure and back-link-ariific, I hope!

It sure is! Bitey the Shark would be very proud. (Man, I can't wait to see what people build out of these things!)

That's a wrap for today. But come back on Wednesday for more stuff!

Our last big new item for the fall has arrived! I thought we'd be waiting weeks for these (or else I would have waited and launched all our new stuff at once!), but we got them in early and they are awesome. Presenting... Sam and Fuzzy Mashup Magnets: 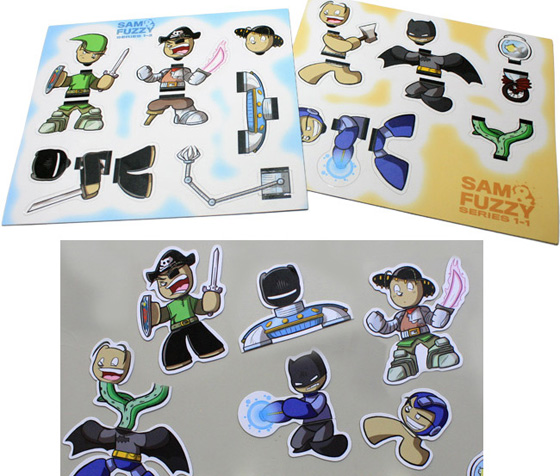 What do you do with Mashup magnets? Well, that's up to you! You can slavishly recreate the original characters:

Or, you can get a little creative:

Or, you can get a disturbingly creative:

There's two sets in total, featuring all the pieces you need to build:
• Fuzzy
• Mega Fuzzy
• Ninja Mafia Fuzzy
• Fantasy Warrior Fuzzy
• Bat Fuzzy,
• and of course, Post Apocalyptic Pirate Cyborg Fuzzy.
There are also a variety of bonus pieces, including Future Fuzzy and Buddy the Goldfish heads, and a variety of "splitter" pieces that you can use to build more... elaborate creations.

I had so much fun designing these things, guys. I wanted to do something really unusual and unique for webcomic swag -- and something I could really load up with obscure Sam and Fuzzy references. I hope you're as pleased with the end result as I am! Nothing would make me happier than having them do well enough to justify creating new sets with even more (fully compatible!) pieces.

We return on Monday, with a brand new comic and a slightly delayed Q and A feature! (I spent way to much time today making magnet preview graphics... ha!)

PS: I know... I launched a new thing only two days after the other new things! So now, super keeners who already ordered our new shirt or whiteboard might be annoyed because they wish they could have ordered the magnets at the same time to avoid paying for shipping twice. If this is you, email me and I will fix things.