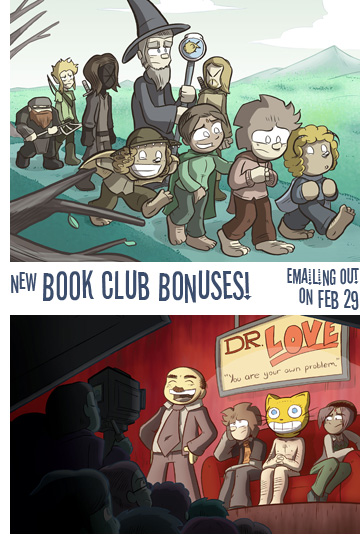 Shannon and I are making our way back from Los Angeles today, so excuse the relative radio-silence down here and enjoy today's comic! There is only one more strip left in our "Animal Kingdom" chapter, and it's a doozy.

Tune in on Friday for that, and also a fresh round of reader Q and A! (And if you've got a question you want added to the pile, just drop me an email with "Q & A" in the subject line!)

Shannon and I are in Los Angeles today, visiting with webcomics pals and experiencing theme parks. But a new comic arrives all the same, thanks to the magic of advance preparation. Enjoy!

And speaking of comics... you're remembering to keep up with the new Skull Panda website, right? I mention it because I am terrified of the violent repercussions that may befall me if I don't. It is true that some of the strips on there will be familiar to longtime Sam and Fuzzy readers, but there's plenty of new comics turning up, too!