"What does Brain's voice sound like? I get a general feel for everyone else, but he seems to escape me." - Alex

I am not entirely sure! I imagine Brain's dialogue as sounding almost unflappably calm, but distinctly inhuman and unsettling sounding.

At one point, I considered making Brain's speech bubbles visually different from everyone elses, either by giving them a shaky border or by making them inverted -- that is, black with white letters. But before the big reveal, there were a number of strips where Fuzzy overhead Hazel talking to someone, without realizing it was Brain. I didn't want to tip people off that there was something especially weird about the person she was talking to, so I opted to draw his bubbles the same as everyone else's.

"When will I be able to brag to the world via Goodreads that I've begun reading the Underground RPG manual!?" -Claire

Um... whenever you like, I think! I'm not actually the one who has been adding the previous Sam and Fuzzy books to Goodreads, so I guess it must be something readers have been doing!

Speaking of the RPG gamebook... it sounds like we'll be getting the physical editions back from the printers soon! So soon enough, backers will have their paper versions as well as their ebooks. (And after that, we'll make 'em available to everyone else!)

"In the survey you sent out, you said the next pinup book was called Headcanon 2: Burlesquetric Boogaloo. That's... just a joke, right?" -Eden

I do not joke about something as serious as the burlesquetric boogaloo. Too many people have already died from it.

I am calling it that because the book's "main chapter is a big feature based on the burlesque performances of the Off the Sauce storyline! (And also because I have terrible judgment.) I'm drawing one for each character in a format that's sort of halfway between an normal artbook and a comic, to squeeze more humour and personality into it. I think it will be pretty cool! I still have one more to draw, though.

(And incidentally, anyone who purchased the previous pin-up book should have recieved the aforementioned survey by email to help me pick a bonus chapter for book 2. Let me know if you didn't!)

News for those who need it: Gumroad now accepts Paypal! That means all my digital products -- my Sam and Fuzzy e-books, my Pin-up art collection, and my other art ebooks and desktop backgrounds -- can now be purchased by Paypal instead of credit card, if that is your preference. If it is... have at it! 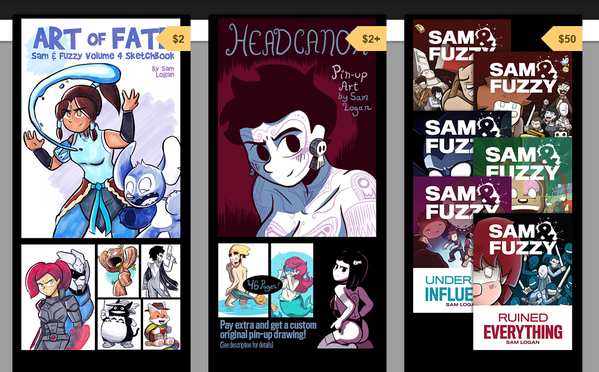 We return on Friday with a new comic and a new round of Q and A! If you have a question you'd like me to answer, just pop it into an email with "Q and A" in the subject line!