It's Roan! Remember Roan? Of course you do!

In other news... it's been a long time coming, but at long last, I am almost done the sequel to my Pin-Up art ebook! I'm putting the finishing touches on the last couple of pieces this week. If you liked the first one comedic, cartoony pin-up stylings, I think you'll dig this one even more. (And if you missed the first one, it's still available in the ebook store if you're interested.) Anticipate!

Sam and Fuzzy Q & A:  When Edition
Got a question you want answered? Just drop me an email with "Q & A" in the subject line!

"So in comic 2126, Sam and Fuzzy get off the bus and talk about how Fuzzy did something to the Taxi, but then in comic 2149, Sam is in a taxi working his normal job. When exactly is the current story line taking place?

My assumption had been that 2126 was post taxi when Sam and Fuzzy had to work other jobs to pay for their destruction of the taxi with other jobs, but that doesn't seem to be the case now." -David

The first chunk of this flashback chapter took place waaaaaay back around the time of comic 44, when Fridge originally appeared! (In fact, we saw that exact moment again, from a slightly different perspective.)

At that time, Sam's taxi was in the shop as a result of Fuzzy having a "minor fender bender" in a parking lot. Sam wasn't able to get back to work until the repairs were done... although for a while, he did try to do his job using a loaner from Mr. Ackerman. But eventually, the car was repaired, and Sam got back to business as usual.

However, the current chunk of this chapter... the chunk you are reading right now... does takes place around the time of the story you are thinking of! That one was called Performance Anxiety, and we've seen a couple of moments from it referenced in the strips that ran earlier this week.

It is absolutely 100% not necessary to know any of this to actually read this chapter. But if you're curious how it all interlocks, that's how!

"Is there any way to get past issues of Sam and Fuzzy Extra? Or did you have to be backing at the time to get them?" -Amy

Oh, for sure! If you become a $5+ Patreon backer, you'll be able to find links to the previous issues (as well as the current one) in the Patreon activity feed. Some (but not all) of the stuff in the issues is kind of time sensitive... previews, concept art relating to the current chapter, and so on... but it's all still there to download and keep if you are interested in viewing it after the fact!

"Are you going to be at Emerald City this year? This is my first time going!!" -Alex

I am 99% sure I will be at Emerald City this year. There have been some minor complications with the booth, but I believe it's all sorted out now! We will most likely be in the Skybridge again this year, which is the big windowed walkway connecting the two main halls. I will most likely be one of the very first things you see when you enter the con!

Come back on Monday for more comics! 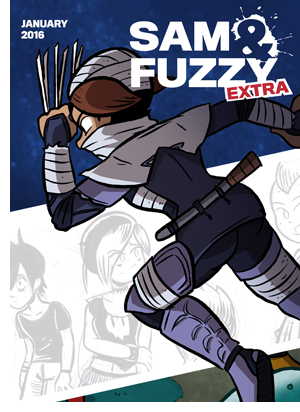