Torontonians! I have travelled to your fair city for this weekend's TCAF! If you're going to come to the show -- and you totally should, because it's free! -- you can find me at the Topatoco booth on the third floor (booth #321-323). I'll have books, t-shirts, and posters, and I'll be doing a bunch of custom art commissions, too! 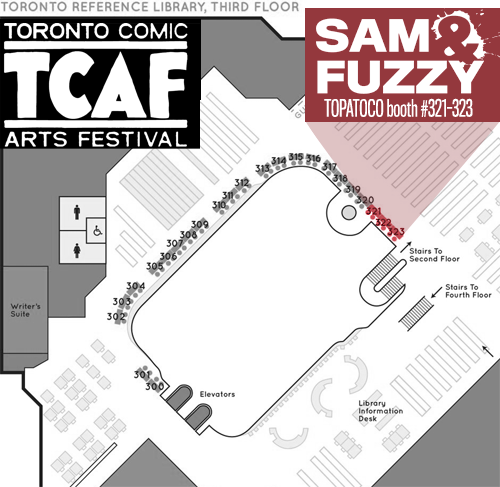 Come back on Monday for our next comic, team. See you then!

Of Preorders and TCAF

First of all, this Monday (May 15th) is the last day to place a preorder for any of our new books! After that, the preorder shop will close up, and the books won't be available to order again until a little later this year.

Our preordered copies will mail out in early June, alongside all the copies ordered by our kickstarter backers, so if you want to get 'em first thing, now's your chance to make sure it happens! Plus there are also a few other fun things you can order alongside 'em if you choose, including our older books, some cool prints and postcards, and a couple of fancy custom pin-up commissions.

Second note: I will be at TCAF this weekend! I haven't been in a few years, so I'm really looking forward to it. If you're going to be in the Toronto area, be sure to come by the show... it's free!

We return on Friday with a new comic. See you then, team!

Who could forget Fig Pig -- an attempt to genetically engineer a living stationery mascot gone horribly wrong! He made his debut way back in the Trade Secrets storyline, then re-appeared (in much larger form) for the city-destroying monster-on-monster battle that was Buddocalypse! (The Valle de los Monstruos, as you may recall, is Fig Pig's home territory these days.

We return on Wednesday with our next comic! See you then, everybody.