Sam and Fuzzy Q & A:  Blank Edition
Got a question you want answered? Just drop me an email with "Q & A" in the subject line!

"Quick question for you: how many Blankfaces are there in the mafia at any given time? You’ve explained the basics of Blankface hierarchy, and we know there are at least two “high ranking” blankfaces and two “trainees” at a time. But how many more are there? Do they always come in pairs? Are there actually dozens of blankfaces at time? Hundreds? THOUSANDS?!? And do all blankfaces train under the previous generation, or do some take an online course, or get generic mafia training and just work their way up? I’m not sure why blankfaces are suddenly so important to me, but please, Sam, I need to know!

Fig Pig is now massive! But in this comic, Sin clearly states that FigPig has reached its full size. Was Sin mistaken in his estimates of the size FigPigs can reach, or did something occur that amplified FigPig’s growth? Or does it have something to do with whatever Sin was saying before Fuzzy cut him off?" -Dawson

Dawson sent me two Q and A emails and I like them both, so I'm gonna answer them both! You can't stop me!

Traditionally, at any given time there were only two actual titular Blankfaces.  They acted as the Ninja Emperor's right hand men -- or I guess left and right hand men? -- and also served as the commander and second-in-command of a small force of a couple dozen particularly elite ninjas. These ninjas were all functionally Blankface trainees, and many of them came from families with a tradition of serving in that role.

The current Blankfaces often took their two favourite trainees under their wings to serve as apprentices -- Mr. X and Mr. Y were the apprentices of Mr. Black and Mr. Blank, respectively. But ultimately, when the time came for the two Blankfaces to actually be replaced, the two most qualified replacements were chosen from the full force of trainees via tests and trials.

After the original Ninja Mafia collapsed, the Blankface forces disbanded along with the rest of the Mafia. X and Y, however, were particularly loyal to the ideals of their office, which is why they happily returned to serve as Sam's Blankfaces. Sam didn't actually need them -- to serve as his loyal assassins or to train a new generation of future Blankfaces -- so he had to busy them with other tasks.

As for Fig Pig, well... I don't think Sin thought he would ever grow this big! Like Dev, I think Fig Pig's continued growth can be attributed to his unexpectedly long lifespan, due to being placed in a particularly accomodating environment. As for his ability to reproduce -- I never really got to dig into it in this story, but my thinking was that was intentional. Fig Pig was originally imagined as a pet consumers could buy, and I think the original Fig Pig was built to spore for that purpose!

"Why weren't you at Rose City Comic-Con this year? We missed you!" -Alex

In previous years I've exhibited with my pals in the Helioscope Comics Collective. But I'm not actually a member of Helioscope, and this year, they got a smaller space than in the past and they didn't have any extra room outside buds. By that point it was too late to try getting a booth just for myself, and I had to bail!

But to be honest, it wound up being kind of a good thing for me. I had been travelling non stop for the previous three weeks -- from Gen Con to the eclipse to a friend's wedding to Fan Expo -- and on my way home, I had an unexpected airline snafu that resulted in me being awake nonstop for like 36 hours. If I'd had to leave again for Rose City two days later, I probably would have passed out from exhaustion during the show. I'd still like to go next year if I can, though!

My last con of the year, incidentally, will be next week's Edmonton Expo! See you there, Edmonton pals.

"I find your spin-off pin-up art interesting, since Sam and Fuzzy is otherwise not really a very 'pin-upy' comic. How do you decide which characters to use, or what kind/rating of pieces to use them in?" -Dave

I don't really like it when "pin-upy" art is shoved into comics when it doesn't actually make sense narratively. It rarely fits in the story of Sam and Fuzzy, which is why you rarely see any in there! But it's still a genre of art I enjoy working in. I just prefer to give it its own space, instead of cramming it into comics where it doesn't really fit.  (I handle my desire to draw dumb video game jokes and millions of dogs in a similar way!)

For pin-ups, I usually pick the characters myself, unless it's a commission or a piece based on a poll I post for Saucy Hippo tier Patreon backers. If it's an existing character, I'm not really worrying about the "rating" as I am about limiting myself to pieces or scenarios that I think fit with their personality. As you'd probably guess, some characters lend themselves easily to "pin-up-y" ideas, while others only work in certain scenarios, and others don't work in any. If a character falls in that last group then they just don't get to be in any dang pin-ups. Thems the breaks!

Besides, if I have a fun concept for a pin-up piece, but don't have an existing character that's a logical fit, it's not like I can't just make up a new character!

We return on Monday with a new comic. See you then, team!

It's been a real journey for X and Y, hasn't it? They laughed... they cried... they fought a bunch of giant fruit/pig mutant stationery mascots. A full day!

Patreon backers, current and future: all our September bonus art, PDFs, and pin-ups are now available for you to download! 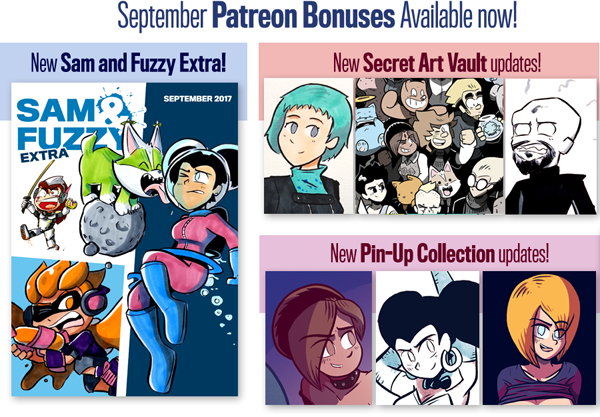 For those who are new around here, Patreon is a service that lets interested readers throw some voluntary financial support at their favourite free-to-read online comics, and get some fun bonuses in exchange. I've got a bunch of fun goodies for folks supporting at various levels, including backer-voted bonus art, a monthly S&F Extra e-magazine, an ever-growing online vault of my art and sketches, and for those who enjoy it, an optional separate vault of my pin-up work and more (im)mature jokes and art.

Patreon backing is, of course, totally optional. But if you like bonus digital goodies, it's not a bad way to go. And of course, there are plenty of other ways to support my work, too... I have merch and ebooks and even custom art available, too. It's all equally appreciated, and part of the bizarre magic formula that has somehow allowed me to actually keep doing this dang comic for living. Thank you, everyone!