I've got a couple more special one-off comics for you while I'm hard at work on the next big Sam and Fuzzy chapter. (Which should kick off next week!) Today's is one of the new comics I wrote for VOTE DOG. It stars Dobot, who appears in a few of the exclusive new comics in the book.

Dobot was built by head Ninja Mafioso mechanic Edison, based on repurposed Buddy Bot tech. I created a few new animal characters for VOTE DOG! And like all the existing ones, they all wound up connecting to the Sam and Fuzzy universe in some way or another, because... well, I guess because I don't know how to stop myself!

At this point, the VOTE DOG Kickstarter is getting pretty close to our funding goal! But it's gonna take a little more to get us there, and give us a shot at adding some stretch goal bonuses to the book before the campaign ends. So if you're interested in seeing this book get made, we could really use your support... be it by backing, or by helping spread the word to other dog-loving folks who might enjoy it!

In other news... I haven't talked about Patreon much lately with all the Kickstarter hullabaloo, but I'm still busy making all the usual bonuses over there! All our June Patreon rewards are now available: there's a bunch of fun new bonuses for Extra and Art Vault backers, and a quartet of new (nsfw) pin-ups and comics for Saucy Hippo folks. If you're interested, you can learn more about it on my Patreon page!

We return on Wendesday with our next comic. See you then! 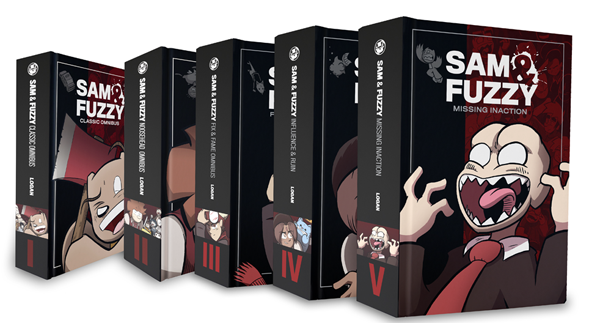