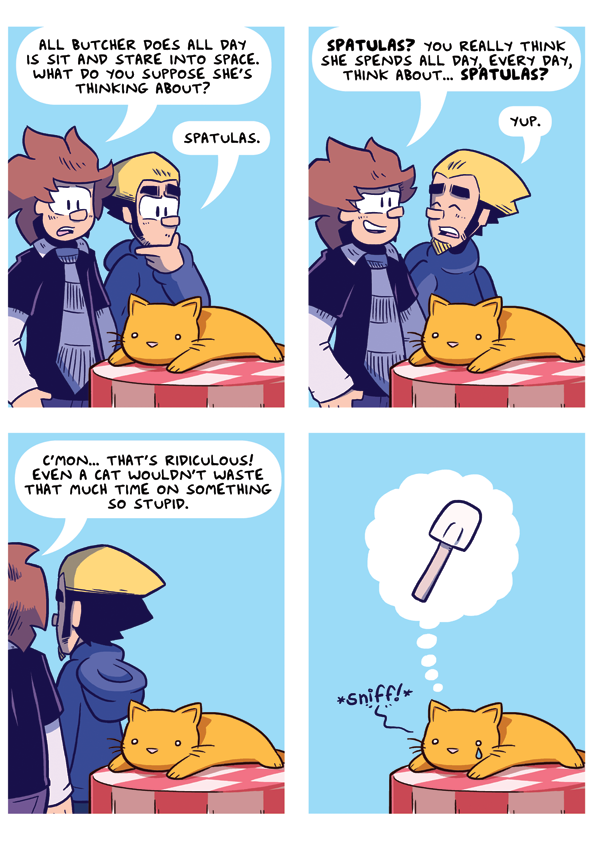 Hi, team! I know you're all dying to see what happens next in our big story... and worry not, we'll get back to it soon! But for our next couple of updates, we're taking a brief intermission and running some fun stand-alone bonus comics while I prep the next part of the main saga. (Doing this lightend my schedule enough to take a little vacation earlier this month, which was greatly appreciated!)

Today's special feature is actually a remake of an old classic! It's an update of this Classic-era chestnut, created for Vote Dog! I couldn't do a pet comic collection that didn't include this classic Butcher moment, but it needed some updated art and colour to fit with the rest of the book, so I decided to remake it! Unfortunately, Fuzzy refuses to appear in any remakes unless we used his updated CG look, so Aaron had to fill in for him instead. (As you'd expect, Aaron was happy to appear in a pet-themed book, especially one with a number of Buddy strips in it!)

If you haven't already, I definitely recommend you check out Vote Dog: my big book of comics starring Butcher, Baker, President Dog, Buddy, and other critters!  I created a bunch of brand new comics just for the book, as well as a number of expanded or updated ones. There's even a special appearance by Rikk and Chompy!

Anyhow, that's all for today. Come back on Wednesday for our next comic!

Sam and Fuzzy Q & A:  Dissolving Edition
Got a question you want answered? Just drop me an email with "Q & A" in the subject line!

"If the tar dissolves inhumans, and erases humans' memories... How was Brain able to (accidentally) wipe the minds of inhumans? Wouldn't he just dissolve them?" -Airyu

Aha! Well, at the risk of overexplaining things, I think it's best to think of it this way:

Pure, raw tar responds to ambient thoughts. Thoughts can shape it and cause it to transmute into new life. But on the flip side, tar is very dangerous to the people doing the thinking, and can cause brain damage if they come into contact with too much of it. Memory loss is one of a few possible options, depending on the severity of the exposure.

Anyone with a brain, human or inhuman, can psychically interact with the tar in this way. But inhumans have an additional vulnerability... they were created from transmuted tar, and exposure to sufficient quantities of it will cause their bodies to break back down.

In it's raw form, tar is very volatile and dangerous. The Committee was only able to use it to erase the memories of their members by using small, precisely calibrated doses designed specifically for each individual human and inhuman. (You don't want to know how they learned what the doses should be.)

But Demons like Brain and Hart are something special. They're tar that, over time, developed a mind of it's own and took control of itself. They've achieved what all those Comittee scientists always wanted... they're able to (mostly) control the tar's powerful, otherwise unpredictable effects.  That's why they're able to touch inhumans without disolving them, and use the tar's psychic abilities to do things like read and hijack minds. But it's also why Brain has, on occassion, wiped some or all of a person's memories by accident. It's difficult to control, even for him!

"I only recently made the connection (mostly because of how prominent the Tar is in the current storyline), but the Tar seems to be very similar to the slime from "Ghostbusters 2". It's a liquid-ish substance that reacts to mental processes (for the slime, it was emotions, for the Tar it seems to be more related to thoughts), it seems capable of spawning sapient beings (ghosts in Ghostbusters don't necessarily come from the slime, but the courtroom scene shows that emotionally-charged slime makes ghosts appear), it flows underground in vast quantities, and being splashed with it can have direct consequences on the individual, including harmful ones.

Is this a conscious inspiration, or are those two conscious gooey substances similar in so many ways by coincidence?" -Michael

Not a conscious inspiration, no! But I can see why you'd wonder!

Here's a telling detail about me: although I was a kid in the 80s and 90s, and was generally interested in geeky stuff, I did not actually see either of the Ghostbusters movies until I was an adult. The same actually goes for Star Wars, every Indiana Jones film other than Raiders, and a lot of other movies that are often seminal favs for guys my age. Childhood me was really, aggressively not interested in live action films. I loved cartoons and animation, and that was about 95% of what I watched until I was at least a teenager.

So long story short, almost all my memories of Ghostbusters are from the animated series! I know I did watch Ghostbusters II at some point, but to be honest, I'm not sure I could have remembered the plot well enough to summarize it, and I don't remember liking it much. I guess you could say that, in that particular case, bustin' did not make me feel good. Ha!

That's a wrap for this week, team. See you on Monday for our next comic! I'm going to be pausing our main story extremely briefly while I catch up from returning from my vacation, but there will be a brand new comic of a different sort, and we'll be back to the big saga again before you know it!

Don't worry! Aaron and Lance are here to take care of Butcher, Baker, Buddy, and all the other critters. Or at least, they're here... for now.

We return on Friday with a new comic and a new round of Q and A! As always, if you've got a question for me, just pop it in an email with "Q and A" in the subject line.