Happy Labour day! (And the day before my birthday, to boot!) I'm taking it easy today, but here's a comic for you! Come back on Wednesday for the next one.

Sam and Fuzzy Q & A:  Disarming Edition
Got a question you want answered? Just drop me an email with "Q & A" in the subject line!

...Oh, I see, after dealing with mistakenly swapping X's arms way back when, you've decided from now on that arms are an all or nothin' business, aye?" -Claire
Rex actually only lost half an arm! He's wearing these big robotic arms on top of the one-and-a-half arms he still has left.
(Check out this Q and A if you are unfamiliar with the classic Mr. X arm snafu Claire is referring to!)
"If inhumans are made from tar, why didn't they turn to stone as well? I think I'm missing something!" -Airyu

The tar is a mysterious black substance that can be alchemically transmuted into new and different things -- from simple materials to complex living creatures -- in response to ambient thought.

The forms of Hart, Brain, and the giant monster they became were made from pure, untransmuted tar. At the climax of the story, all of the tar connected to them -- which, presumably, was most or all the tar that still existed -- was transmuted into stone.

Inhumans are descendants from creatures that were created from transmuted tar. They aren't pure tar anymore, and can't be transmuted into new creatures or substances.  They are, however, weak to pure tar, and if they come into physical contact with too much of it, they will break down and disolve back into the mix. (I am sorry to report that any of the poor inhumans who fell into the tar and disolved did not make it back, and whatever is left of them is indeed part of all the stone.)

"How did Hazel 'die'? She was pulled into the tar in Rock Bottom Pt. 51, but so were Sam, Dev, and Fuzzy in Brain Damage Pt. 52 and they came out fine. What was the difference between the two events?" -Jay

Sam, Dev, and Fuzzy were actively brought into the tar and shielded from its physical effects by Brain, Candice, and Hart, respectively... each of whom was hoping to use an outsider to help overpower the others. (Brain mentions that he's protecting Sam from its effects here.)

Hazel, on the other hand, was absorbed by raw, uncontrolled tar responding reactively to her thoughts. Her body apparently developed the same weakness to tar as inhumans -- probably because of how much Brain and Hart had messed her up. (Brain had repeatedly and extensively edited her memories, and Hart hid in her for an extended period of time.) Poor Hazel!

Meanwhile, a brand new issue of Invader Zim is out today in comic shops and digital comic/book stores! Issue 46 is part one of a massive four part saga, written by moi and drawn by Maddie C. Check it out! 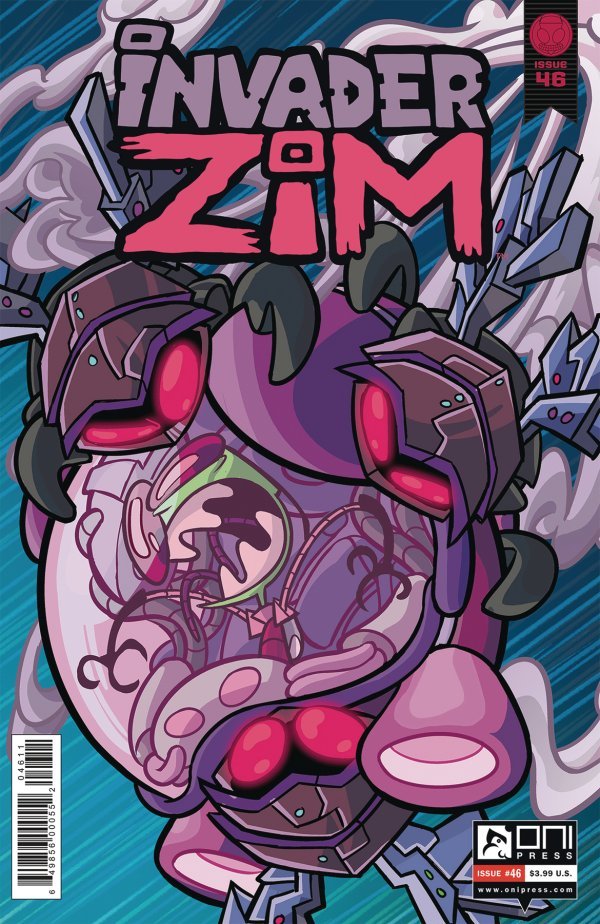 We return on Friday with a  new comic, plus our Friday Q and A feature! If you've got a question for me, just drop it in an email with "Q and A" in the subject line!