It's Inktober time! For those who don't know, that means I'll be drawing one original black-and-white art piece every day this month, and posting 'em on my Instagram and Twitter. Follow either of those to check 'em out! (And as usual, I'll be selling the originals for afterwords, so let me know if you see one you'd like.)

You can see my previous year's pieces by scrolling through my Instagram history, or by visiting these galleries:

So far, I've only done one for 2019... Doc Ock from Into the Spider-Verse. But there will be more to come daily! 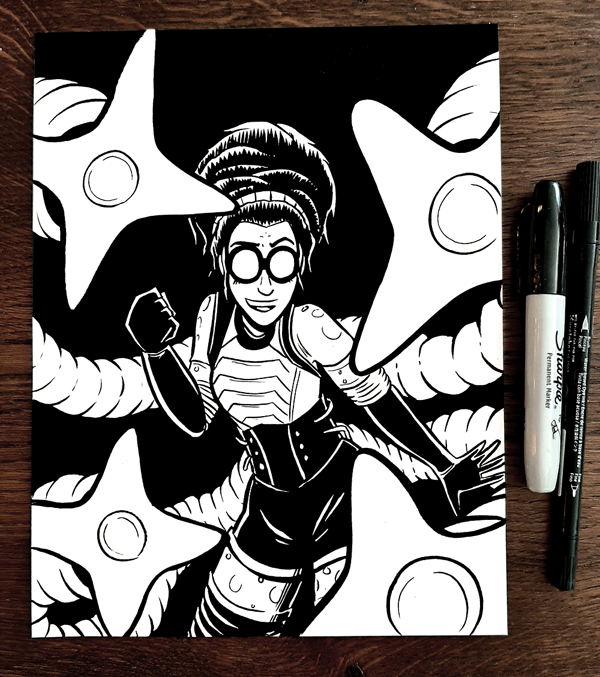 Our next comic arrives Friday. See you then!

You maaaay recall that Sam was living on the surface under a fake "Sam Schaus" identity, until Keller wrecked it.  You may even recall that the reason Sam needed a fake idea in the first place was because his real identity was a fugitive wanted for being a mob boss, thanks to Fuzzy secretly directly his N-M-S employees to commit various crimes. But I know you didn't forget that his real name was Sam Samms. No one could forget that!

Meanwhile! "WoOoOoOof!" t-shirts are available to pre-order now on Topatoco. PSA: This is a special seasonal shirt we're making just for Halloween, and I'm not sure if we're going to carry it after that! So if you definitely want one, be sure to get a pre-order in.

Sam and Fuzzy Q & A:  Bonus Edition
Got a question you want answered? Just drop me an email with "Q & A" in the subject line!

"I was wondering, did you write Bonus as he is because you missed the wacky hijinx of early Fuzzy? Bonus just makes me feel so nostalgic..." -Airyu

I love Bonus! I didn't write him that way for that reason specifically, but it's a fun... uh, bonus.

Bonus is kind of a prototypical, childlike Fuzzy. He has a the same energy level and impulsive qualities, but none of the internal drama about his tragic past, and none of the scheming or ambitious qualities Fuzzy learned from Hazel.

"How much of your time/effort in creating the comic is involved in writing, and how much is drawing?

And how much of what you draw do we never get to see? Do you have an archive of exploratory sketches and failed pages? I remember a while back you posted a page of character designs (for Hazel?), I guess I'm just hoping to see some more of that sort of thing." -Tom

I'd say I spend about 20% on the writing and 80% on on the rest. I don't mean to make it sound like I just crank that writing out, but pencilling, inking, scanning, toning, and lettering are all extremely time consuming. (Which I suppose is probably why, in most monthly comic books, those jobs are frequently divided up among multiple people!)

I don't have a massive archive of exploratory sketches! I do try to include the most interesting ones, particularly any character concept art, in my book collections. But a lot of stuff -- particularly all the super messy, hasty thumbnail sketches that I sometimes make before pencilling a page -- is not much to look at, and is usually just scrawled onto scrap paper that ultimately gets recylcled.

I actually don't think I have ever made any complete "failed" pages that wound up being cut or unused! Usually, if something isn't working, it doesn't make it very far into the art process. And when I do draw a page that has things I'm unhappy with, I'll usually just edit the lineart of the problem areas on the computer with my tablet, rather than redrawing the whole page.

"Is Dr. Crab part of the saucy hippo comics? Hopefully to do more than just make jokes, of course!" -Alexander

Absolutely not, under any circumstances.
We return on Monday with our next comic. See you then!
-Sam Logan