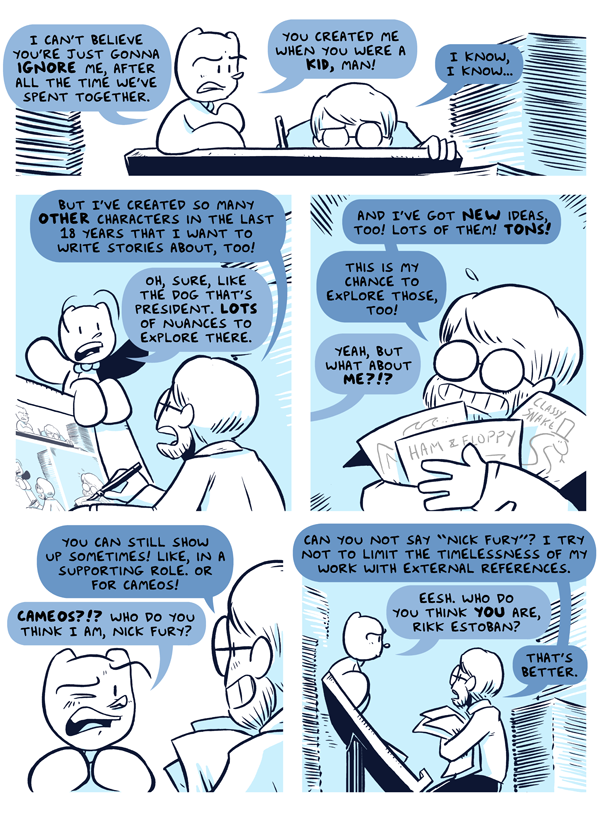 This is incredibly therapeutic. Haha!

We return on Friday with a new comic and a new round of Q and A! As always, if you've got a question you'd like me to answer, just pop it in an email with "Q and A" in the subject line!

PS: a reminder to our Patreon Pin-Up tier backers... be sure to submit your favourite pin-up idea for the "Saucy Hippo Secret Santa draw" soon. I'll be picking our two random winners on Dec 1st!

Wow! Over the past few days, I've heard from so many of you. It's been a little overwhelming! Thanks to everyone who wrote in or messaged to share their feelings about the conclusion of our big arc, and about Sam and Fuzzy in general. I'm touched to know the comic means so much to so many of you.

Well, friends, I gotta tell you... it means a lot to me, too! Lots of people have been asking me how it feels to wrap such a huge story. So I thought I'd try to share the answer in... uh... the way I know best.

Today is the last day to get Xmas delivery with International First Class Mail!

It's that time again... time for looming holiday ordering deadlines in our online store! Today is the last day non-US buyers can order my books, shirts, and other swag via normal International First Class Mail and get it by the 25th. After today, you'll need to use International Priority!

Well friends... we did it! It took a solid ten years of comics, but we made it to the end of the storyline that started way, way back here. Thank you so much for joining me on this journey! It's been my privledge.

Of course, as all you oldest old-timers will know... this is actually the third time I have finished a big story here on old samandfuzzy.com. (Although this one was by far the longest.) So while this does mark the end of Sam and Fuzzy as you've known it for the last decade, it does not mark the end of me making comics and sharing 'em with you all every Monday, Wednesday, and Friday. I mean, why would I stop doing that? I have a sweet job and I'm doing it for as long as I can get away with it.

So what's next? Well, what's immediately next is some new shorter stories and stand-alone comics. One thing I will definitely be taking advantage of is the chance to tell a new canonical Christmas story set in the S&F universe, which I haven't been able to do in yeaaaaars. But there will be some other new stories about starring some familiar faces, too, as well as some comics about brand new characters and some that set in totally new universes! And yes, sooner or later you will see me jumping into a longer story, although you may be surprised when and how we get there. (Maybe I will be, too!)

But what about Sam and Fuzzy themselves? Well, I gotta tell you... I feel like I've told the big story I really wanted to tell with both those guys. So while they will still be around, I think they'll be spending a little time out of the limelight. You know... except for when they don't. You'll see what I mean.

Sam and Fuzzy Q & A:  Extra Long Climactic Edition
Got a question you want answered? Just drop me an email with "Q & A" in the subject line!

"Eric.  Any chance you could show us what he was like?  So far we've only learned about him indirectly, through Hazel, Brain, and a little bit Sin.  I'd honestly like to see Eric before he became Fuzzy.

But then, that's mostly because I have a soft spot for the good guy.  Maybe it wouldn't be a good idea, now that I think about it, because he would be doomed by canon anyways. Eh, just thinking out loud." -Brendan

One of the major things I decided right from the beginning of this whole decade-long story arc is that the audience would never see or learn any more about Eric than Fuzzy does.

Fuzzy overcoming his obsession with who he used to be, and ultimately rejecting the opportunity to find out, is kind of the emotional center of this whole arc. I thought it might lose a lot of the impact if we actually got to see Eric, and learn the things that Fuzzy never gets to. That's why Eric never appears in flashbacks, and why Fuzzy's dreamy recollections of Eric's last moments are depicted in first person and devoid of any Eric dialogue. Hazel's second-hand recollections are as good as it's gonna get!

"Wow, a ten-year arc in my favorite webcomic is drawing to a close! Better go check the forum to see what people are saying -- oh wait." -awk

Haha! I admit, at times like these I am a little sad I never figured out how to fix the forum. For those who don't know, it's been down for years... the software got too old to be automatically updated to a new version, and the old version was full of security vulnerabilities that bots were using to try and install malware on my server. It was completely beyond my personal technical understanding to fix myself, and it was honestly not really being used much anymore anyway, so I just sorta gave up trying to figure it out.

Over the last couple of months, I have heard from so, so many of you on twitter or instagram or just via email, sharing some very touching thoughts about the big finale and the comic in general. It has been lovely! But I'm sorry there wasn't an obvious place for you all to share your thoughts with other readers! There is a pretty underutilized unofficial Sam and Fuzzy reddit... maybe that could be a place for that sort of thing?

"Thank you for tying up Hazel's story, it would have been infuriating to leave it at the end of the last chapter. But it's a very weird kind of memory erase. They all have been. They only seem to forget who they are but somehow remember their skills and language and the names of objects. How does that work?" -Alan

Seriously, though... I don't know if this is an official term, but Fuzzy has what I have always referred to as "cinematic amnesia". It's the kind of amnesia people always seem to be getting in fictional thrillers, where the victim forgets everything about their personal identity, but not functional knowledge like how to walk and speak, or what dirt, clouds, and trees are. Fuzzy describes it very matter-of-factly in this early comic, which was me kind of jokingly pointing out the conceptual absurdity of it despite how common it is in fiction.

That said... in this story in particular, Fuzzy's amnesia is a result of a supernatural conceit. Brain is a creature that can read and remove memories, and he was targeting Fuzzy's memories of specific events in his life. Due to a loss of control of control, he accientally wipes his memories of all the events in his life, and with them, his sense of self. We'll just assume Brain wasnt going anywhere near the parts of his mind that controlled his motor skills or basic understanding of reality and human society, and that's why many of those were not affected. Is that very narratively convenient and not realistic? You bet! But I think it follows enough of its own internal logic to work in a fantasy story.

As for Hazel's amnesia at the end of the story... I think you could probably write entire essays worth of speculation about how the tar-powered Fuzzy somehow (accidentally?) brought Hazel back, but with the exact same kind of amnesia that he had. I have my own thoughts on this, but it's something that I wanted to leave readers thinking about!

"With the comic coming to a close on this era of Sam&Fuzzy (congratulations!) you have a lot of freedom to branch out with characters, storylines, and art. What are you looking forward to most about the comic going ahead? And on the flip side: is there anything that you’re going to miss most about Sam&Fuzzy now that you’ve brought this incredible arc to a close?" -Dawson

I am very excited about having a chance to tell some more short stories in general! I have a soft spot for a lot of the relatively self-contained chapters of this series, like the "Trade Secrets" Fig Pig bonanza, the "Off the Sauce" burlesque heist, the "Unconscionable" Conscience Cat/Carlyle story, or most of the "Crossed Wires" Megalopolis adventure. There was less and less room for that as the comic got closer and closer to its big climax, and I'm eager to get back to building those kind of tales.

I'm also excited to focus on some characters that I love writing but never had as much space for as I wanted, like Gert and Jess, Detective Morris, or X and Y... as well as a chance to write some stories with Dev as the lead. And last but not least, I have a few completely new ideas and characters I've been kicking around that I am really looking forward to developing and writing about!

The thing I will miss most, on the other hand? I think I will miss the absolutely certainty of knowing exactly what I will be working on for, uh... years! It's complicated. But I think I'll be able to share a little more about how it feels in the imminent future.

And on that note, it's time to call it a day! But, worry not. I will be back on Monday with a brand new comic for you all. See you then!