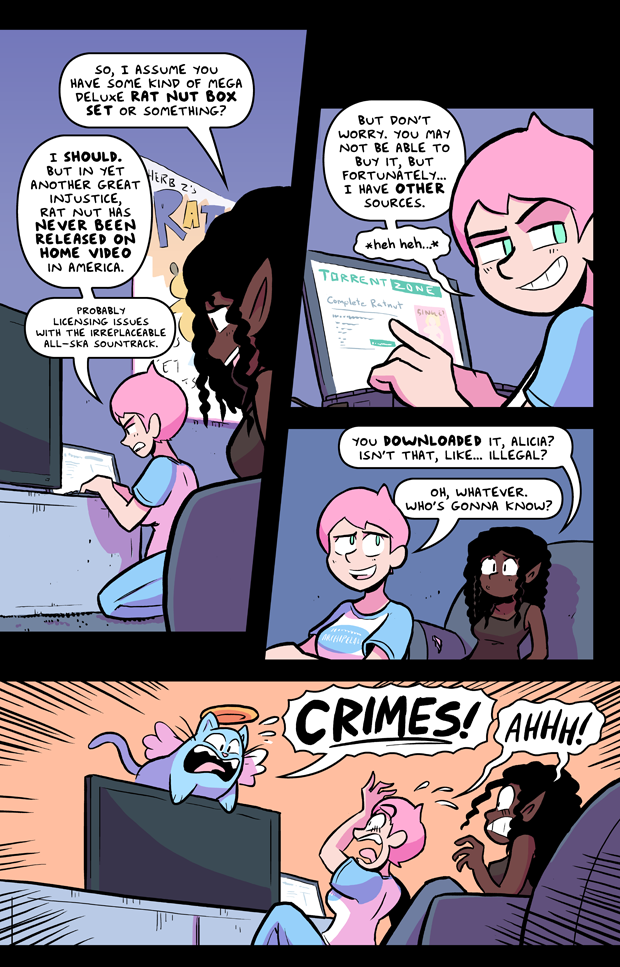 Yes... it's the return of Conscience Cat! You can find every single one of his appearances here. But my favourite "big three" Conscience Cat-focused stories are:

Crisis of Conscience: where he turns to Dr. Crab for therapeutic guidance,

Unconscionable: where he struggles to find a new line of work and meets a legendary S&F character, and

Four More Years: where he reteams with Dr. Crab to help President Dog work through his issues.

(And boy, what a range of art eras those three stories span!)

A new short story begins today! This one is a bit of a follow-up to You Can Only Pick Three, which first introduced us to Rat Nut. (As well as a bunch of other weird old shows.)

Today's comic originally appeared on my Patreon a few months ago as a bonus comic. I thought I'd share it here today while I ramp up for the new short story that starts here on Wednesday!

But hey... did you know that I share a bonus comic every month on Patreon with all backers? I also post a monthly batch of behind-the-scenes features for S&F Extra tier backers, extra art for folks on the Art Vault tier backers, and NSFW comics and pin-up art for Saucy Hippo tier backers. So there's a ton of fun rewards for folks backing at all levels of support. (Thank you, Patreoners, for keeping the lights on and the comics rolling!)