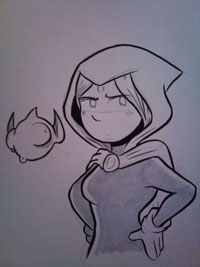 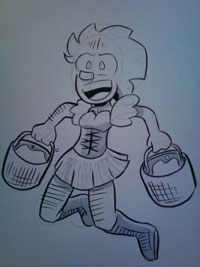 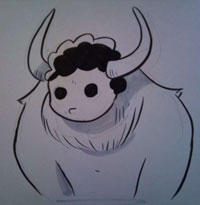 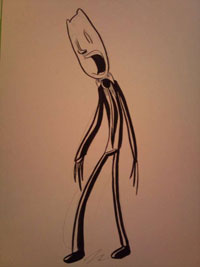 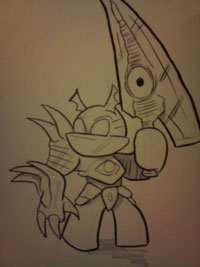 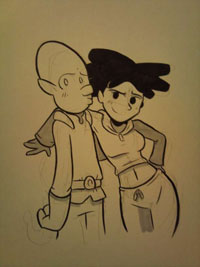 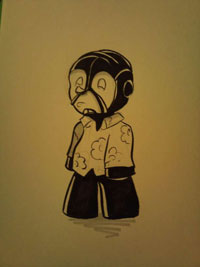 Sam and Fuzzy Q & A: Weasel Edition
Got a question you want answered? Just drop me an email with "Q & A" in the subject line!

"Upon my latest archive diving, I found something curious. A lot of times we've heard referrences to some greased ferrets Mr. Sin, in his many incarnations, seems to be obssessed about (comics 1319 and 1371 are examples). Did he get the inspiration for such ferret shenanigans from Sid's song about him?" -Bernardo

I can't help it. They're just such sexy little bastards!

"How did Fuzzy get on the ferris wheel if he's not as tall as the 'you must be this tall...' sign?" -Alex

That strip was actually my subtle editorial about the tragic and crippling wave of apathy currently sweeping North American theme park employees. Something has to change, Alex.

"I was just poking through the store again (early Giftfest shopping and all) and took a closer look at the "Ask Me About the Conspiracy!' shirt. I noticed that at least one of those post-its has turned out to be true since the shirt went into sale. Perhaps this is too spoilerific of territory, but are there other easter eggs hidden in the very fabric of our clothing?" -Jessica

Haha, maybe! It was a few years ago now, but at the time, I was definitely trying to load it up with a few authentic Malcolmisms. Malcolm's most accurate theories were primarily derived from the Sin tower security feeds his head was hijacking, so as a general rule, they tend to be about things Mr. Sin is involved in. Some of those things have just wound up taking a lot longer for me to get to than I thought they would!

Of course, a lot of the other items on the shirt were strictly for the gags -- primarily the more pop-culture-y ones, but some of the others as well. So don't get mad if the squad of sentient plants never show up!

"What happen to Fuzzy's syndicate? (From this strip.)" -Adam

Even now, people still talk about the dramatic rise and sudden fall of Don Bearro -- the greatest cautionary tale in the history of organized crime. It is the stuff of legend!

That's a wrap for this week, team. But come back on Monday, where we take a brief intermission from our current story to present some extremely scary Halloween comics!