Another Inktober has come and gone. That means I have a big gallery of Inktober pieces to show off, and a bunch of new original drawings to sell!

In the gallery, you'll find all 31 of my Inktober pieces, as well as a couple of pieces from the big extra Inktober pin-up set I drew for Patreon.

Want to buy an original? At this point, almost half of them have already been scooped up, but there are still a bunch of really cool ones available! Just have a look in the gallery to see which ones are left, and email me if you spot any you'd like!

That's a wrap for today, team. See you on Wednesday!

Sam and Fuzzy Q & A:  Facial Hair Edition
Got a question you want answered? Just drop me an email with "Q & A" in the subject line!

I think he's thinking of Sam's trimmed Crush beard! Fuzzy was a little critical when he shaved it off, but Fuzzy's just a little critical in general. Sam's scraggly Classic-era beard is too unspeakable to even mention.

"Are you going to be selling your Inktober originals again this year?" -Beth

I haven't had a chance to make a formal gallery/sale page yet, but you can check out all the finished pieces on Instagram or Twitter.

If you see one you like, just drop me an email and let me know! Just be warned that as of this post, the following pieces are already sold: Spider-Verse Doc Ock, Ursula, Sonic Vs. Mega Octus, Doc Aphra, Doctor Teeth, Dr. Maria Torres, Superior Spider-Man, Pikachu/Mimikyu, and Dr. Mrs The Monarch/The Monarch.

"How come you didn't draw any pin-ups for Inktober this year? I missed the ones you've done in previous years with the creative methods of censorship." -Ben

I meant to do one, but I got kind of swept up coming up with ideas for all the goofy themes I did this year and didn't end up having any room for S&F stuff at all! (For those who don't remember the pieces Ben is referring to, you can see them in the 2017 and 2018 Inktober galleries.)

That said, I actually did a whole separate batch of 10 Inktober-style pin-ups for the Saucy Hippo Patreon tier this month. It's a new goth-themed striptease set... I posted a preview of it over here, and the rest will be up on Patreon immienently. Given that it was for the Saucy Hippo, I didn't actually make any goofy censored versions this time, but I suppose I could make some extra one or two just for the sake of tradition!

Boo! DID YOU KNOW, there's still time to get one of our special spooky Halloween exclusive Corgi shirts? Go nab one while the nabbing is good! 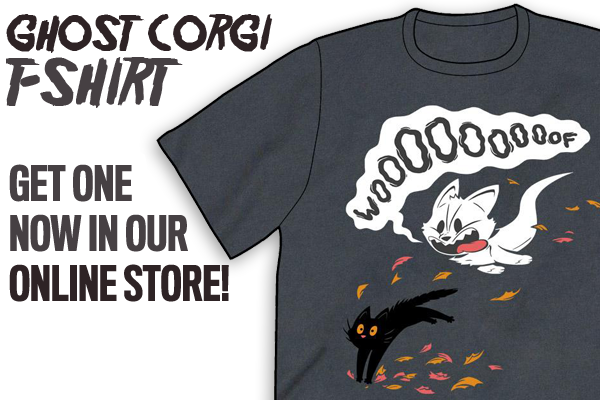 Come back on Friday for our next comic, and a new round of Q and A! Got a question you'd like answered... about Sam and Fuzzy, the Invader Zim comic, Inktober, the Saucy Hippo Pin-Up stuff, or literally anything else? Drop it in an email with "Q and A" in the subject line!