You Can Only Keep Three: Addendum 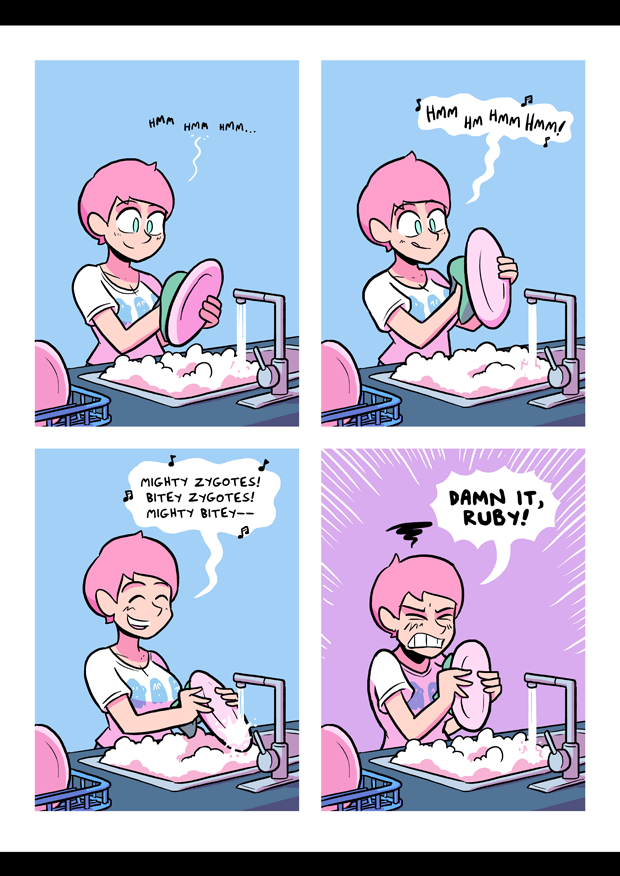 As I emerge from the post-heatwave madness, enjoy this long brewing addendum to the You Can Only Keep Three storyline. (And more specifically, to this comic.) Can you get two seconds of an imaginary song stuck in your head for weeks and weeks? Yes, as it turns out.

In other news, the final volumes of Sam and Fuzzy are now available in my Topatoco store!

We've got Volume 6 and 7! We've got complete series sets, both in softcover form and in deluxe hardcover box sets with slipcases! We've got empty slipcases for folks who already have hardcovers 3-5 and just need the case! And we even have new pins!

It's a veritable wealth of new swag for anyone who missed our Kickstarter last year. Enjoy! And come back on Monday for our next comic. Woo!

As you may have heard, we were hit with a record heat wave these past few days over here on the west coast! We are just starting to see the other side of it now, but man... I have lived here my whole life and I've never seen temps like this. Woof!

Anyhow, it has been far, far, far to hot to sit in front of a computer or make comics... so instead, I thought I'd share this bonus comic with y'all today that I originally made a few months ago for Patreon! It serves as an explanation for why Trevor has been coloured a lighter shade of brown than Fuzzy in some of my recent comics. Of course, the true reason is exactly as Fuzzy describes... it just feels better to portray Fuzzy, Bonus, and Trevor as three different shades of brown if I'm going to be drawing the three of them together in colour comics. But if anyone asks, this is the canon explanation.

Looks like I forgot to wrote a newspost to go with this comic! I blame the heat wave for turning my brain into hot mush.

But that's a wrap for Natural Wonders! I hope you enjoyed this experimental foray into mixed media comics. I had a lot of fun making it! It certainly involved a lot more time outside than my usual work.

Come back on Wednesday for something else!