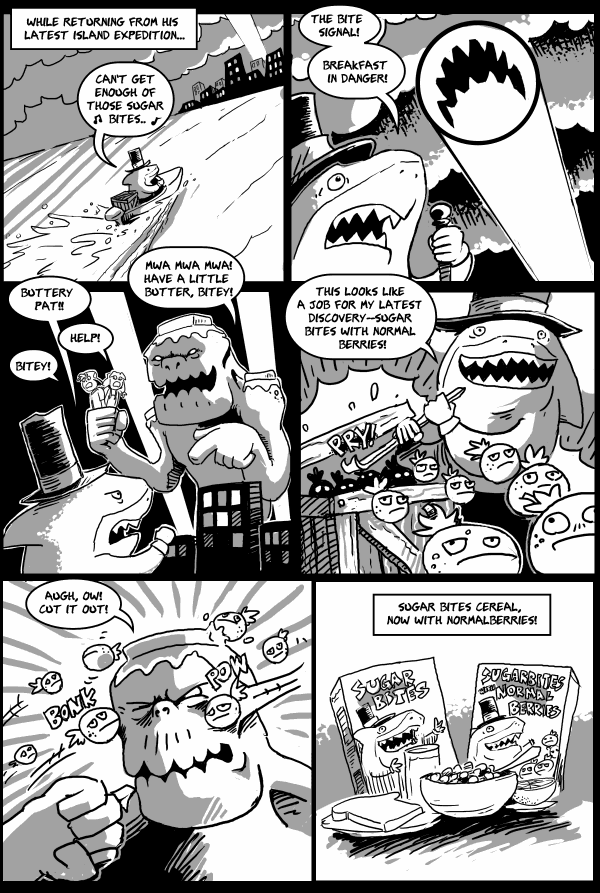 Michael Stearns, he of the always impressive Dawn of Time, continues to build the history of popular Sam and Fuzzy-verse cartoon character Bitey the Shark! I've only ever drawn Bitey in his modern, extreme form, but as Sam and Fuzzy once explained, he was once a much less abrassive (if no less commercial) mascot. Fortunately, we have Michael to provide us with "classic" Bitey snippets... both in his previous guest strip, and now in today's!

Eric Johnson is the man behind Radioactive Panda, or as it is known in it's current iteration: Stone Clouds. He's also no stranger to Sam and Fuzzy guest strips, but I think this one tops them all.

Eric said I could also post this alternate version of today's comic which features some extremely tasteful spot colouring. Enjoy!

"Will you be reimbursing readers for all the pants that were crapped in with the reveal at the end of reunion?" -Dan-O

You all knew the risks when you started reading! Didn't you sign the waiver?

"Remember how I totally called that Fuzzy was Eric? I deserve a prize, because I was right about something. On the internet." -Geoff

Sure I remember! I definitely saw a few "Fuzzy is Eric" theorize-ers over the past year... although I have to admit, not as many as I was expecting. I think Sam and Fuzzy Fix Your Problem has all the clues you need to figure it out. But I certainly don't blame anyone who missed them... it's a dense story and some of those clues are buried pretty deep.

Every now and then, someone asks if it annoys me when a reader predicts a plot twist, or if their predictions ever tempt me to change where the story is going. Well... no! I'm sure not every writer feels this way, but my personal philosophy on mystery writing is that completely unpredictable left-field plot twists are just kind of unsatisfying. A surprise twist with absolutely no clues or foreshadowing building towards it... just feels random and cheap to me.

I like giving people a chance to figure things out. And if a few of them do, great! Folks who suspected Fuzzy was Eric may not have been as surprised by Reunion's ending as everyone else was, but I think there were still plenty of new revelations about exactly how and why it happened... and plenty of new buried clues to fuel future speculation about other mysteries! Plus, they have the satisfaction of being proven right about something, and feeling like a big, brainy man. (Or woman.) Who doesn't like that?

"If Fuzzy is really Eric, then why didn't any of the people who knew Eric recognize him? Like Hazel's clients!" -Alice

Throughout Fix Your Problem, Hazel repeatedly refused to let Fuzzy meet any of their employers. Well, now you know why!

But Fuzzy did meet Mr. Rexford, who would definitely recognize him as Eric. Keeping that in mind, re-read from this strip to the end of the chapter. I think you'll be surprised! There's also some fun stuff towards the end of the fight sequence that, again, will read very differently now that you know a bit more about Brain the cat's... uh... true nature. Fix Your Problem is loaded with these kind of easter eggs. All the more reason to give it a re-read! (Perhaps even in its sexier book form.)

Anyhow, that's a wrap for this week. Come back on Monday for the start of O-GAWD 7's second half!

Tony Esteves was the man behind Cigarro and Cerveja, one of the very first webcomics I ever read (and loved), and one that I was very sad to see go. But now, Tony has a brand new strip called Legendary Woodsman! How new? So new that I didn't even know it existed. So let's depart on a magical adventure and discover Tony's new work... together. We can do it!

Come back tomorrow for week #1's final dose of O-GAWD action. See you then!